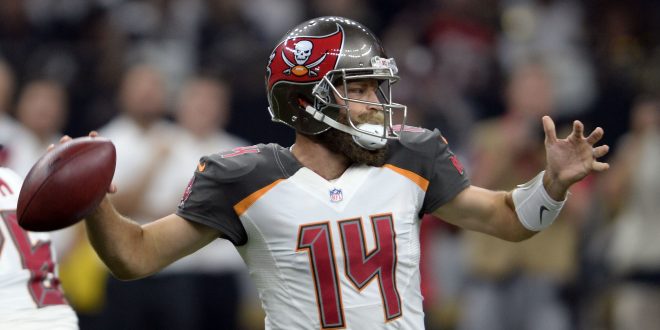 The Tampa Bay Buccaneers rocked the New Orleans Saints in the Big Easy on Sunday afternoon with a high scoring affair. The Bucs defeated division rival, and Drew Brees, on the Saints turf with a huge 48-40 win.

The Saints got on the board early, but not long after they scored, the Bucs tied up the game. The Saints retaliated with a field goal with just over four minutes left in the first quarter to take a 10-7 lead. However, that was not going to sit well with the Bucs. They came back and scored a touchdown in six plays to take the lead.

It wasn’t until late in the second quarter that the Bucs really found their groove and took a significant lead in the game. With just under five minutes left in the second, Bucs QB Ryan Fitzpatrick passed to wide receiver Chris Godwin for a touchdown. Then, twenty seconds later, the Saints fumbled the ball and Bucs safety Justin Evans returned it making it 31-17.

After halftime, the Bucs kept charging. Fitzpatrick threw a 50-yard pass late in the third quarter to connect with wide receiver Mike Evans and the Bucs took a 41-24 lead. For the remainder of the game, the Saints tried playing catch up to earn a victory in their season opener. However, that did not happen and the final score was 48-40.

In June, the NFL announced that Bucs QB Jameis Winston was “suspended for the first three games of the regular season for violating the NFL’s personal conduct policy,” according to an article written by Marc Sessler on NFL.com. With Winston’s absence, the battle for the starting QB job was between Fitzpatrick and Ryan Griffin. Ultimately, Fitzpatrick won.

He certainly proved he earned the job with his impressive performance in Sunday’s season opener. Fitzpatrick completed 21 of 28 and threw for 417 yards with four touchdowns. Two of those touchdown passes were also 50 yards or more.

It wasn’t only fans and media who commented on Fitzpatrick’s game. His teammates were even stunned by what he did on the field.

After the game, Fitzpatrick commented on the team’s confidence going in and how it wasn’t just one guy who stole the spotlight, but a team effort in their win over the Saints.

Other players that led the Bucs to their impressive victory were running back Peyton Barber, who rushed 69 yards and had 19 carries, and Evans, who had seven receptions on 147 yards with one touchdown.