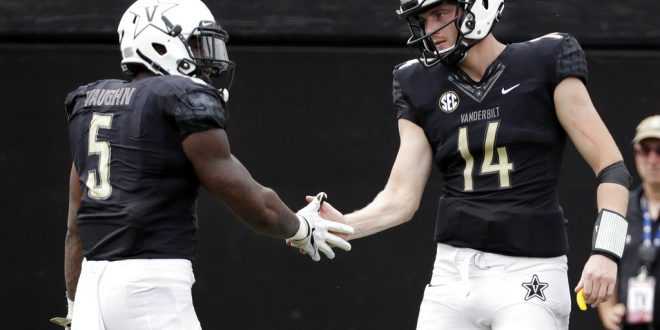 Vanderbilt quarterback Kyle Shurmur (14) congratulates running back Ke'Shawn Vaughn (5) after Vaughn scored a touchdown on a 46-yard run against Nevada in the second half of an NCAA college football game Saturday, Sept. 8, 2018, in Nashville, Tenn. (AP Photo/Mark Humphrey)

In week 3 of the college football season, the undefeated Vanderbilt Commodores travel to South Bend to take on the undefeated #8 Notre Dame Fighting Irish. That’s not a sentence you read every day. The two teams have not played since 1996, and Notre Dame leads the all time series . . . . at 2-0. Notre Dame is the prohibited favorite, but Derek Mason’s Vanderbilt is keeping its hopes up for the upset.

It’s only two games in and Notre Dame is already having an up-and-down season. The Irish started it off with a top-15 matchup against the Michigan Wolverines, which reignited a historic rivalry. Notre Dame defeated the Wolverines 24-17 through a stalwart defensive effort and big plays from quarterback Brandon Wimbush. Wimbush played phenomenal and looked much improved from last season. The victory catapulted Notre Dame into the top-10 of the AP Poll, and put the college football world on alert.

Then Ball State came to town. In week 2 of the season, Notre Dame defeated the Cardinals 24-16. A win is always good, but this was rather lackluster. Ball State as a team has significantly less talent, but was able to stay within one score of Notre Dame until the end. A large part of the Irish’s struggles: Brandon Wimbush. After playing well against Michigan, Wimbush took a step back against Ball State. While he threw a career-high 297 passing yards, he also threw three interceptions and did not utilize his mobility as a weapon.

The Notre Dame defense is still excellent, but Wimbush needs to get back to using his legs along with his arm. If he can do that, the offense can take a step forward and can finally score more than 24 points in a game this season.

While Notre Dame has enjoyed national exposure and a high AP Poll ranking so far this season, Vanderbilt has gone the quieter route. The Commodores are also 2-0 on the season, but have been much more dominant. They’ve blown out both Middle Tennessee State and Nevada by a combined score of 76-17. The way has been led by senior quarterback Kyle Shurmur, who set a school record in single-season touchdown passes last year with 26. He’s been great so far, throwing for 428 yards and 4 touchdowns in two games. Vanderbilt head coach Derek Mason likes what he’s seen out of Shurmur so far.

The Vanderbilt defense has looked much improved over last season’s struggling unit. New defensive coordinator Jason Tarver has done a great job so far. The Commodores have not had to face an offense with better talent yet. They will be put through an ultimate test by Notre Dame, which has NFL-caliber players at every position.

Given the seasons that these two teams have had so far, one could expect this to be a close game. The reality is different. While Vanderbilt has played well and has the looks of a good team, it doesn’t have the pure athletes to compete with the Irish. On top of that, Notre Dame head coach Brian Kelly will fire up his team after playing so poorly. Notre Dame will likely win the game, but the margin of victory will tell the world what kind of team the Irish are. If Wimbush can showcase his dual-threat ability and the Irish run up the score on Vanderbilt, then everyone will forget about their struggles against Ball State. If it’s a close game, everyone will ask one question: “Is this Notre Dame team really THAT good?”

Vanderbilt at Notre Dame kicks off this Saturday at 2:30 p.m. Eastern Time on NBC. 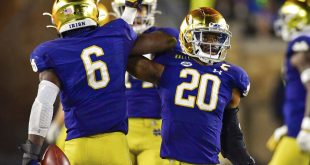