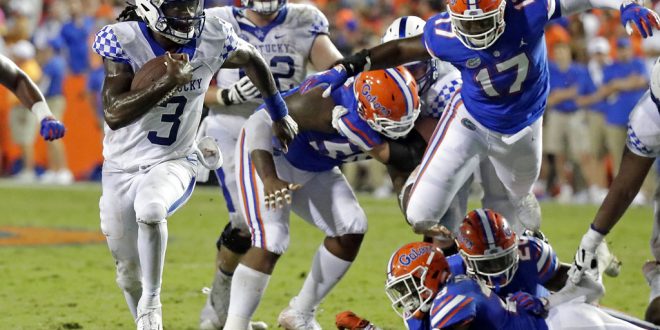 Kentucky got it done last weekend at Florida in what could have been one of the most exciting wins in Wildcat history ever. This week, Kentucky will stay at home and welcome the FCS Murray State Racers for an intrastate game at 12 p.m. EST.

A 32-year streak, no more. After Kentucky’s huge 27-16 win in the Swamp and a perfect 2-0 record, Cats fans weren’t the only ones excited. Head Coach Mark Stoops said the airplane was full of happy football players on the way home. Of course there is always room for improvement, but Kentucky really did dominate Florida on both sides of the ball. Going into this week, the Wildcats will have to keep their momentum and not get complacent as they prepare for Murray.

Quarterback, Terry Wilson made plays time and time again last week for the Cats. He ran 105 yards and  scored on only 10 carries. He was named to the Davey O’Brien Great 8 list for week 2.

Wilson, a sophomore chose Kentucky after spending a year at Garden City Community College in Arkansas. In his 2017 season he was rated the No. 5 overall junior college player by ESPN. Wilson finished the year by rushing for 518 yards and five touchdowns on 126 carries. Passing wise, he completed 57.6 percent of his passes for 2,133 yards, 26 touchdowns and 11 interceptions. Those stats placed him first in the conference for touchdown passes. Saturday’s game should be another opportunity for him to prove his consistency.

On the defensive side of the ball, Stoops was impressed by the way his team was productive against the Gators.

This week’s SEC Defensive Player of the Week belongs to the Wildcats which will give Murray State’s offensive a run for their money.

Totaled five tackles, 1.5 tackles for loss, one QB sack, one fumble caused, one pass breakup and one QB hurry.@joshallen41_ is the #SECFB Defensive Player of the Week. pic.twitter.com/syLQgWzmxm

Senior Linebacker, Josh Allen recorded five tackles, 1.5 tackles for loss, a sack, a forced fumble, a pass breakup and a quarterback hurry. Allen was in charge of one of the more memorable moments of the game when he sacked Florida’s Feleipe Franks in the final play of the game. Franks fumbled the ball in the process which allowed Davonte Robinson to score Kentucky’s final six unanswered points.

In just two games this season, Allen already has 15 total tackles, 4.5 tackles for loss, 2 sacks and a forced fumbled.

For the second time in program history, the Racers will head to Lexington. The last time the two teams kicked off against each other was in 2003 with the Wildcats taking home the win with a final score of 37-6. So far this season, the Racers are 0-2 but last week’s FCS matchup game against Central Arkansas, the Racers did hold their own for awhile. Murray State was up 3-0 in the first quarter and were only behind by one in the second. Central Arkansas pulled away with the win in the fourth quarter.

The only linebacker for Murray that could be a good matchup for Kentucky’s Josh Allen, is Quincy Williams. For the second week in a row, Williams led all tacklers in the game, recording 12. This number beat his previous record from last year with 10 tackles in a single game.

It’s pretty safe to say that Saturday’s game won’t be an easy scoring one for the Murray State Racers. Kicker, Gabriel Vicente, could possibly be the teams’ saving grace. He made a 29 and 34 yard field goal last week and will look to add more this weekend if the offense can offset Kentucky’s strong defense.

This matchup is set to kick off at noon EST on Saturday. The game can be watched live on an SEC Network Alternate or on the ESPN Watch App.