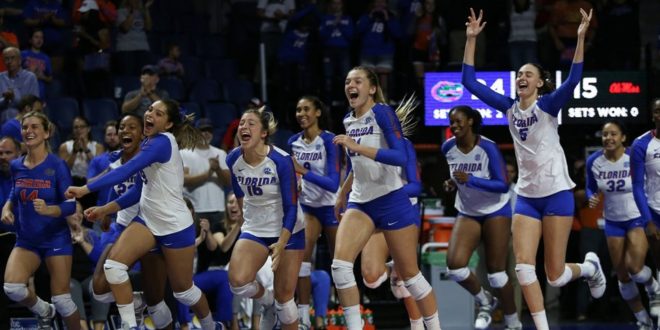 Florida made it look easy over the weekend as they opened up volleyball conference play.

The number 11 Gators (11-3) swept the Ole Miss Rebels and Mississippi State Bulldogs 3-0 over the weekend to start off the SEC schedule 2-0.

Florida’s pin hitters impressed all weekend led by the standout performances of two sophomores. Holly Carlton paced the Gators on Friday while Paige Hammons led the way on Sunday.

Carlton set a career-high hitting percentage against Ole Miss with a 10-for-12 performance. That .833 clip passed her previous mark of .583 that she recorded against C-SUN just 16 days ago.

“I think that their (Ole Miss’s) defense and they had to put so much responsibility on our middles,” Carlton said Friday night. “Rachael (Kramer) and Taelor (Kellum) both had awesome nights so that just makes my job easier.”

Wise gave credit to the quality sets by redshirt senior Allie Monserez and the Gators’s passing to allow Carlton to perform the way she did Friday night.

Hammons showed up for the Gators on Sunday with a .550 hitting percentage; her 11 kills on Sunday matched her career-high against Arkansas during the 2017 season.

“She has just been so good at hitting what the defense gives her, and not forcing the action,” Wise said of Hammons on Sunday.

The Gators as a team recorded 20 service aces on the weekend. Hammons and libero Allie Gregory combined for 13 of those 20 aces (Hammons with six and Gregory with seven).

“All week in practice we have been talking about finding the answers to how we win a game and how we can execute our game plan,” Gregory said. “We did that this weekend and made a name for ourselves as an aggressive serving team. We executed really well this weekend.”

Wise said the team is finding more servers who allow for the Gators to go on service runs. She credited Gregory for “taking control in the backcourt” against MSU.

Florida impressed defensively as well. They held both Ole Miss and MSU to hitting percentages under .100 (OM: .094, MSU: .097). They outblocked the Rebels 7-2 and the Bulldogs 7-6 with 11 of those 14 blocks coming from junior middle blocker Rachael Kramer. She also hit .333 against Ole Miss and .625 against MSU.

“We’re not going to get two more matches like this at home,” Wise said. “It looks very different on the road next week.”

Florida will be on the road for their next two games. The team will head to Baton Rouge for a match up with LSU on Wednesday and then Tuscaloosa on Sunday to take on 25th ranked Alabama.

The Gators are 17-6 all-time on the road against the Tigers and swept them 3-0 the last time they met in Baton Rouge. The team also swept Alabama on the road during the 2017 season.

“They bring it every time we play them,” Taelor Kellum said of both teams. “I think they’re both powerful teams and I think if we just do what we’re supposed to do and execute really well (then) we’ll be great.”