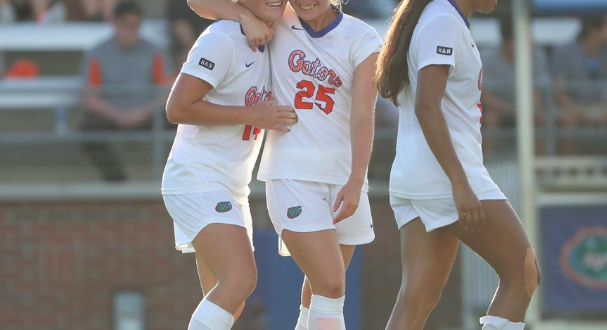 The Florida soccer team now posts a winning record in the SEC after a 4-1 win over the LSU Tigers. The Gators are now 2-1 in conference play and 4-6-1 overall.

The Tigers were first on the board after a goal from Lindsey Eaton in the 22nd minute. It looked like that would be the only goal until halftime. But, in the 42nd, Alyssa Howell scored her first career goal. Then, with 30 seconds left in the half, Lais Araujo connected with the net, putting Florida up 2-1. The Gators left the field cheering and whooping. The spark in the team reignited.

Once the game resumed, Madison Alexander kicked one in in the 60th minute. To top off the game, Courtney Douglas scored Florida’s fourth and final goal in the 84th.

After a seven game scoring drought, the Gators have now scored 10 goals in their last two matches.

A win is always sweet, but the reason behind this win hits close to home for the Gators. Team member Lauren Evans, a recent cancer survivor, made an attempt at a Guinness World Record. With her phone in hand and big smile ready, Evans furiously snapped selfies to break the record for most selfies taken in a three minute span.

Unfortunately, Evans fell just shy of the record. But, with the majority of the crowd donning orange (for the Gators and pediatric cancer awareness), the day still shined for the Gators.

The Gators will head to Starkville on Friday to take on the Mississippi State Bulldogs with a two game winning streak under their belts. Florida will definitely need to go on the road with some swagger, as the Bulldogs are 8-1. Mississippi State is just 1-1 in conference play.