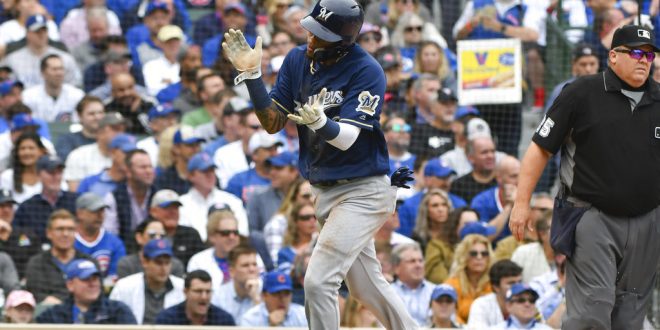 Milwaukee Brewers' Orlando Arcia (3) claps after scoring during the third inning of a tiebreak baseball game against the Chicago Cubs on Monday, Oct. 1, 2018, in Chicago. (AP Photo/Matt Marton)

162 games weren’t enough to decide the National League Central race between the Brewers and Cubs.

Milwaukee won’t mind that they went to a game 163.

The Brewers captured the NL Central Monday afternoon at Wrigley Field, grinding out a 3-1 over the Cubs. The win gives Milwaukee it’s second NL Central title in franchise history (2011).

The @Brewers breeze past the Cubs in the Windy City. #CLINCHED pic.twitter.com/feohmQseCT

The two teams tied for the best record in the National League after 162 games with a 95-67 record. The Cubs will now host the win-or-go-home Wild Card game Tuesday night against the loser of the NL West tie-breaker between the Dodgers and Rockies.

The winner of the NL Wild Card game will face the Brewers in the National League Divisional Series.

A sacrifice and a groundout moved Arcia to third base with Yelich up to bat with two outs. Yelich took a 1-1 pitch and hit an RBI single to center that brought home Arcia to make it 1-0.

The home team responded in the bottom of the fifth via first baseman Anthony Rizzo. Brewers starting pitcher Jhoulys Chacin was tossing a no-hitter through four innings before Rizzo ended it in emphatic fashion. Rizzo caught a fastball that was over the plate and sent a 429-foot moonshot of a home run to right-field to the game up 1-1.

Tie game! The Cubs' first hit of the game is an Anthony Rizzo home run. pic.twitter.com/5GpBKYAi5M

That was really the only mistake of Chacin’s day. He and the rest of the Brewer’s pitching staff combined to give up just two hits the entire game, leaving the door open for Milwaukee to regain the lead.

They did just that in the eighth inning.

Again Arcia was at the middle of things, getting a leadoff single to start things off.

Right after him, right fielder Domingo Santana doubled to left field to put runner’s on second and third base. RBI singles from Lorenzo Cain and Ryan Braun gave the Brewer’s the 3-1 lead that they would hold the rest of the game.

Josh Hader closed things out from there for Milwaukee, earning the save after striking out three in two innings of work.

Native New Englander. Follow me on Twitter: @jonacosta_10
@jonacosta_10
Previous Are the Philadelphia Eagles and Pittsburgh Steelers in Trouble?
Next MNF Preview: Chiefs Take on the Broncos