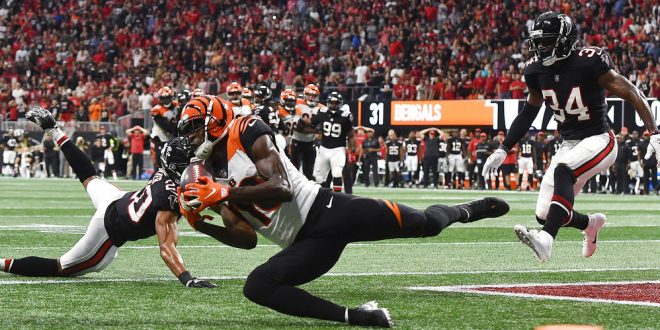 NFL Roundup: A Deficient Defense, 3 OTs and a Questionable Call

The start to Week 4 in the NFL can be summed up in three sentences:

Another Heartbreaker in Atlanta

The Atlanta Falcons were coming off a crushing loss to the New Orleans Saints last week. They experienced another one against the Cincinnati Bengals on Sunday.

Bengals’ quarterback Andy Dalton threw a pass to A.J. Green in the end zone, putting Cincinnati up 37-36 with seven seconds left on the clock. It was the final nail in the Falcons’ coffin.

As usual, Atlanta’s offense did its job. Quarterback Matt Ryan had another stellar performance for the third week in a row. He threw for a total of 419 yards and three touchdowns. Rookie receiver Calvin Ridley had himself a day, catching two of Ryan’s three touchdown passes.

However, the Falcons’ deficient defense, once again, overshadowed the powerhouse offense. The team was without starters Keanu Neal, Deion Jones and Ricardo Allen due to season-ending injuries. And it has shown each week.

A couple of Atlanta sports media personnel took to Twitter to talk about the Falcons’ defense.

Bengals go up by a touchdown after Giovani Bernard ran it in from ten yards out. Defense is even worse than I feared early on

Thankfully, none ended in a tie.

The Titans stunned the Eagles in a 26-23 comeback win. It came down to the wire. With 17 seconds left on the clock, quarterback Titans’ Marcus Mariota hit receiver Corey Davis for a touchdown to seal the game.

Over in Indianapolis, the Colts could’ve pull out the win but were unsuccessful on a fourth-down conversion.

The Texans offense had another chance to score. And they did. Quarterback Deshaun Watson completed a 24-yard pass to DeAndre Hopkins, which set up the winning 37-yard field goal by kicker Ka’imi Fairbairn.

It’s only the fourth time in NFL history that at least one game has gone into overtime in each of the first four weeks of the season.

Did the Officials Rob Cleveland?

Fans and media are still talking about the controversial call.

Cleveland’s Myles Garrett appeared to have strip-sacked Raiders’ quarterback Derek Carr. But the officials said the quarterback’s forward progress had been stopped.

It’s possible the call stole a win from the Browns in regulation. Oakland went on to win 45-42.

ESPN College football analyst Kirk Herbstreit, who grew up in Ohio, didn’t agree with the officials.

How is this NOT A FUMBLE for the @Browns?!? Took a TD off the board in a CLOSE game!! Awful. pic.twitter.com/JoaUfGRjwB

The first quarter of the NFL season concludes tonight as Patrick Mahomes and the Kansas City Chiefs take on Von Miller and the Denver Broncos at Mile High. Live coverage of the game starts at 7:30 p.m. on WRUF.

Camille Woodhouse is a Sports and Media student at the University of Florida College of Journalism and Communications. In the past, she has covered the Atlanta Falcons and Florida Gators football for various sports news outlets. She is an Atlanta native and a fan of football.
@CJW_SportsRadio
Previous Patriots Freeze Miami’s Hot Start
Next Are the Philadelphia Eagles and Pittsburgh Steelers in Trouble?