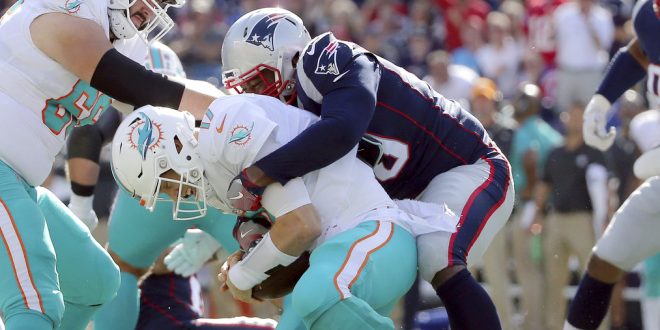 The Dolphins brought their 3-0 record into Foxborough to face a Patriots team coming off of 2 losses. The result was an ugly one for the Dolphins as the score was 24-0 at halftime, and the Miami offense was showing no signs of life against New England.

The Patriots were facing a 1-3 start if they lost, and the Dolphins would’ve gone to 4-0 for the first time since 1995. However, that wasn’t what happened.

Who are the Real Dolphins?

Miami came into the game carrying one of the most dominant defenses in the NFL this year. The Dolphins lead the league with 9 interceptions, and they picked off Brady twice on Sunday.

However, that wasn’t nearly enough as the offense didn’t get into the end zone until just under three minutes left in the game, and at that point, the Patriots had mounted a 38-point lead.

The Dolphins offense continues to struggle as they are currently 29th in the league in total yards, and were only able to accumulate 172 on Sunday. Two of the Dolphins’ three wins have come off of teams that are currently 1-3.

The only above .500 team they have faced was the Titans. During that matchup, Tennessee played backup quarterback Blaine Gabbert. This brings up the question of if this 3-0 start was because of talent, or simply an easy opening schedule.

The Patriots are Back

It is not the desired position to be in facing Bill Belichick after the Patriots are coming off of two losses. The Patriots were due for an explosion following their two defeats, and that is exactly what happened.

Following the Patriots frustrating loss to the Jaguars, where they were 4 for 12 on third down, it was expected that they would bounce back against the winless Lions. They dropped to 1-3 after failing to do that.

However, the Patriots have done this before. In 2001, they opened the season 1-3 and then went on to win the Super Bowl. It appears that with new wide-receiver Josh Gordon, and a 100-yard performance by rookie running back Sony Michael, that the Patriots dominant win could be a sign of things to come.