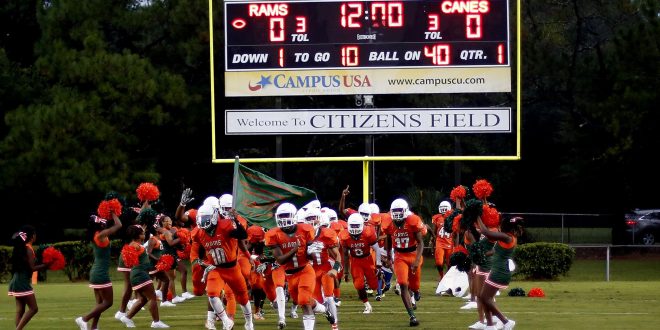 Eastside and North Marion Square Off in Make-Up District Game

Second time will hopefully be a charm for Eastside’s and North Marion’s football teams Thursday night. After being rained out last Friday, the two will be trying to make up the game, which will likely determine the district champion.

Eastside vs North Marion football is rescheduled due to lightning. The game will be played Thursday 10/4 at 7:00pm at Citizens Field. #share

It’s not often that a football team has to prepare for the same opponent two weeks in a row. But that’s exactly what Eastside head coach Cedderick Daniels had to do with his team.

Daniels kept practice light throughout the week and spent time on things they didn’t focus as much on last week. According to Daniels, they just tried to keep it simple.

He also noted the fact that because this week was supposed to be the team’s bye week, he wanted to be sure to be cautious and not get anyone injured.

Daniels knows North Marion is going to give his team good competition.

The ability of some of their players to play on both sides of the ball will pose a challenge to Eastside, as well as their running back who Daniels says is very talented and can change the dynamic of a football game.

After preparing a whole week for North Marion last week, it could’ve been difficult to keep focused when doing the same things again this week. But that’s not what happened. If anything, Daniels says it was actually a blessing to not play last week.

Having a mentality like this as a football player is music to any coach’s ears. Daniels added that this focused mindset throughout practice this week allowed Eastside’s defense to grow and get better.

With about a month left in the high school football season, it’s looking like Thursday night’s make-up game is going to decide a lot more than the winner of just this matchup. Whoever wins this game will likely go on to win the Class 5A-District 6 championship.

After missing out on the title last season, Daniels doesn’t want history to repeat itself.

North Marion will travel to Citizens Field to take on Eastside at 7pm.