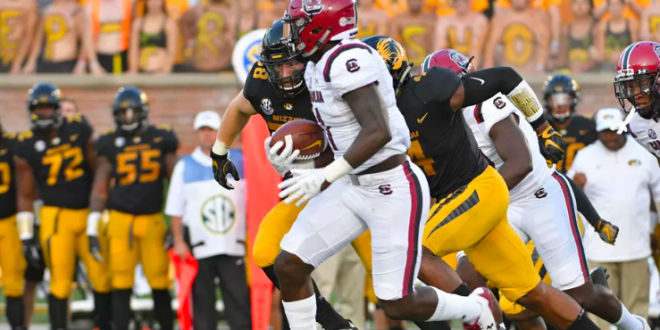 The Missouri Tigers are traveling to South Carolina this weekend to take on the Gamecocks in what could be a very competitive SEC showdown. South Carolina is fourth overall in the SEC East, with Missouri sitting right behind.

Although Mizzou boasts a 3-1 record, their wins were against out-of-conference opponents. The Tigers drew their first loss last weekend against the talented Georgia Bulldogs, losing by a pair of touchdowns.

But through the first month of the season, coach Barry Odom has led his team to offensive domination. Quarterback Drew Lock has already thrown for over 1200 yards, connecting on 11 touchdowns and running for three. His domination is being matched by the teammates around him, namely Larry Rountree III. Although the sophomore running back has only scored two touchdowns on the season, he’s ran for nearly 300 rushing yards – showing fans he’s able to keep the football moving down the field.

Even South Carolina Coach Will Muschamp has seen the Tigers grow in the running game.

Coming off a bye week, Missouri is looking to bring the Mayor’s Cup back home – a trophy created when they joined the SEC in 2012. Since each team is from a Columbia, both schools thought it would be fun to add some competitive intensity. They lost to the Gamecocks last year 31-13. But this year, Mizzou has a much better chance to bring back the Cup.

The Gamecocks are currently looking at a 2-2 record, losing big to Georgia in the second week of play and again last weekend to the Kentucky Wildcats, who have proved they are no joke.  But South Carolina won big over Vanderbilt earlier in the season. They will be hungry to get a second SEC-opponent win.

Quarterback Jake Bentley is still working on his passing domination. While the junior has thrown for seven touchdowns and nearly 1000 yards, he’s also thrown six interceptions. Bentley will need to protect the football this weekend to keep the game competitive. He’s connected well with receiver Bryan Edwards this season. The South Carolina native has nearly 250 receiving yards on 17 catches, tallying three touchdowns in the process. Shi Smith and Deebo Samuel are two more receivers putting up big numbers – which should give the Tigers a defensive challenge.

Missouri Head Coach Barry Odom recognizes how the intense work ethic of the Gamecocks will be tough to handle this weekend.

The Gamecocks are ready for a competitive game.

The Battle of the Columbia’s begins at noon on the SEC Network.