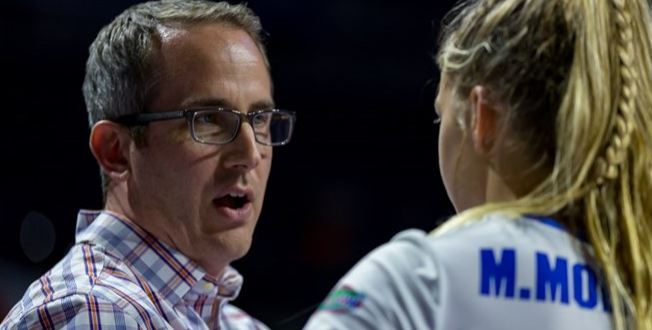 The Florida Gators’ 14-match winning streak has come to an end.

No. 11 Florida (18-4, 9-1) had its win streak snapped by the Missouri Tigers in Florida’s sixth five-setter on the season Sunday afternoon.

Both teams traded sets going into the final frame.

Florida grabbed a 9-4 lead in Set 5, but Missouri battled back to tie it at 11. The teams would go back and forth until an attack error by the Gators sealed their fate.

Wise pointed to Missouri’s serving and the play of Dariana Hollingsworth as the difference in the match.

The Gators set a new all-time high for blocks in a match two days after establishing a program record in that category against Ole Miss.

Wise’s team topped its 23-block outing with a 23.5-block match against the Tigers.

Middle blocker Taelor Kellum led the way with a career-high 13 blocks (all assists). Her previous best was 12.

Two other Gators set highs in blocks on the afternoon as well.

Right side hitter Holly Carlton tallied a season-best eight blocks (all assists) while outside hitter Thayer Hall posted her career-high seven with one solo and six assists.

“The blocking carried us when the offense was just a little disconnected,” Wise said.

Wise said it was a little disturbing for the offense to struggle in that way so late into a season.

Florida finished the match hitting .221 with 22 hitting errors on the day.

Wise said part of the reason for the disconnect was the Florida outside hitters not being used to playing six rotations.

But, she felt it had more to do with mental fatigue than physical fatigue.

Paige Hammons, Thayer Hall, Allie Monserez and Allie Gregory all had those performances while Hall and Monserez had double-doubles.

“They answered the bell,” Wise said.

She stated that not having played the likes of Missouri in a while that Florida’s weaker areas were masked until being exposed by the Tigers.

But, Wise knows to take some like this in stride.

“We’ll learn from this,” she said. “One match doesn’t make a season. We’re only at the half-way point in the SEC with a lot of volleyball left.”

Florida will be in action again on Sunday, Oct. 28 for a rematch with the Mississippi State Bulldogs.