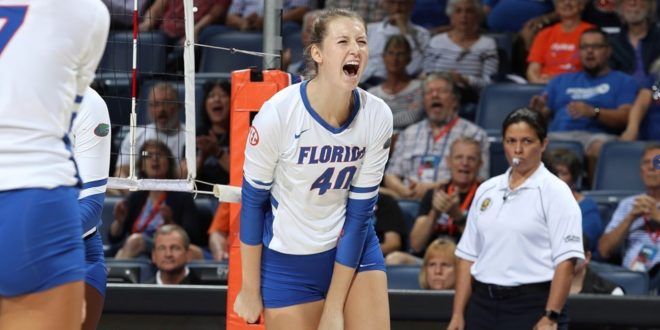 Gator Volleyball Gets Win in Oxford

The 11th ranked Florida volleyball team remains unbeaten in SEC play (18-3, 9-0) after defeating Ole Miss on the road in four sets on Friday night.  The Gators extended their winning streak to 14 games with the victory.

Welcome to the Block Party

The roof was on fire Friday night as Mary Wise’s squad established a new record for team blocks in a match against the Rebels.  Florida’s 23 blocks on the night surpassed the previous mark of 21.5 set back in 1999.

“It was a night where our blocking carried us until the rest of our game caught up,” Wise said.

Wise gave a lot of credit to Mia Sokolowski’s play in her post game interview. She said it was “her best blocking performance of the year.”

Middle blockers Taelor Kellum and Rachael Kramer led the way in the front row.  Kellum had 12 blocks on the night (one solo, 11 assists) while Kramer had 11 of her own (two solos, nine assists).

Florida’s middle blocking pair provided offense for the Gators in addition to their blocking production.  Kramer added 10 kills on .318 hitting to her 11 blocks to earn her first double-double of the 2018 season. Meanwhile, Kellum had nine kills herself on .389 hitting.  And, Holly Carlton maintained her consistent play for the Gators as she tallied 17 kills on .424 hitting; that matched her season-high against conference opponents and was two off her highest mark for the entire season (19 against Northern Arizona). Carlton added on six blocks too.

Freshman Thayer Hall wasn’t far behind with 13 kills including seven in the match’s second set.

“Holly and Thayer’s offense was really what saved us,” Wise said. “Especially Holly, other than the two errors late, she was hitting ridiculous numbers.”

Wise said their was plenty to take away from the match in terms of her team improving as Florida dropped the first set before settling into the match.  She said that kind of start falls on the coaching and she takes full responsibility for that happening.

“My concern was that the first time came too easy,” Wise said in regard to Florida’s match against the Rebels earlier in the season.

The Gators will be back at home against the Missouri Tigers on Sunday afternoon and Wise knows the difficulty it will entail.

“We’re going to need to have our A game Sunday,” Wise said.