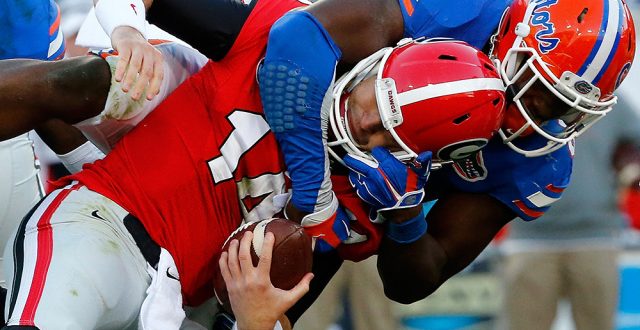 This current Gator football program may have most of the same players as last year’s team, but they are in a completely different situation.  A year ago going into the Florida-Georgia Game the Gators were unranked, had a 3-3 record, and they were on their way to a 4-7 record. The Gators were also on the verge of having their then coach, Jim McElwain, fired.

Fast forward to this season, the Gators are a top ten team sitting in the ninth spot in the AP poll. The Gators are currently 6-1. Their future looks promising with coach Dan Mullen and his new staff leading this program to possible playoff contention.

About a year ago, along with the dissatisfaction of the Gators on-field performance, McElwain brought up the fact that he received death threats at a press conference during the week of the game.

However, McElwain refused to share the details of these alleged death threats.

When 2017’s Florida-Georgia game got closer and closer, the question on everyone’s mind was “Will Coach McElwain be fired in the middle of the season?”

That weekend, Florida Athletic Director Scott Stricklin made it official. McElwain was fired. Former defensive coordinator Randy Shannon was the interim football coach for the last four games of the season.

Distractions led to a Dawg Disaster

It could be argued that the team’s 42-7 beat down by Georgia last year could be blamed on not only the quality or effort of the players but also on the uncertainty surrounding McElwain’s future floating over the program.

Current Florida linebacker Rayshad Jackson was on the team last year and said it was a weird feeling going into last year’s Florida-Georgia game with McElwain on the verge of being fired.  “It was pretty weird. His whole mindset and demeanor was different and we felt like we weren’t going to play right.”

It’s obvious from fans on the outside to see how different this Gator team is. However, the players also notice the difference.

“Coming from then to this year our records a lot different. The way the guys approach the week preparing for a game is different. We went through a coaching change which turned out for the better for us,” Florida quarterback Feleipe Franks said.

A Major Match Up

There’s a lot of excitement going into this Florida-Georgia game. Outside of it being a rivalry game, this is the first time since 2008 that the Gators and Bulldogs were both ranked inside the top 10.  Mullen in 2008, was on the staff as the Gators’ offensive coordinator and quarterbacks coach. The Florida-Georgia game in 2008 resulted in a 49-10 Gator win over the Dawgs.

Mullen got hired at Mississippi State as the head coach, about a month later.

The Florida Gators and the Georgia Bulldogs will play on a neutral site at TIAA Bank Field in Jacksonville, FL. Kickoff is at 3:30 Saturday.