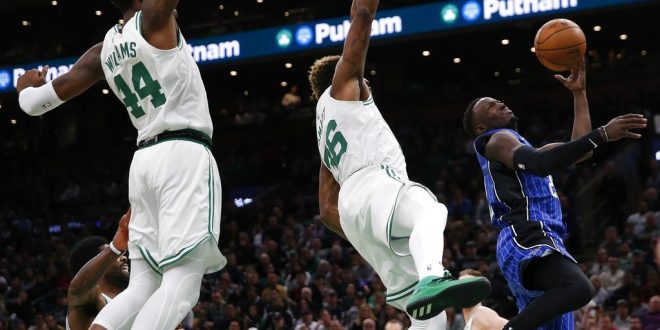 Orlando Magic's Jerian Grant, right, goes up to shoot against Boston Celtics' Marcus Smart (36) and Robert Williams (44) during the second half of an NBA basketball game in Boston, Monday, Oct. 22, 2018. (AP Photo/Michael Dwyer)

In a consistent yet surprising effort, the Orlando Magic secured their first road win against Brad Stevens’ Boston Celtics on Monday night. The Magic defeated the Celtics with a close score of 93-90.

A combination of double-doubles from both Nikola Vucevic and Jonathan Isaac was the key to the Magic’s victory. Vucevic lead the team in scoring with 24 points and 12 rebounds. Isaac put up 18 points and 12 rebounds, season-high numbers for the second-year out of Florida State University. He was taken 6th by the Magic in the 2017 NBA draft.

The Magic never trailed in their battle against the Celtics, but came close to giving up their lead in the final few minutes of the game. In the last two minutes, Celtics forward Jaylen Brown scored a 3-pointer, closing the deficit to 89-86. Isaac responded with a jumpshot. However, the Celtics remained relentless in their push, with Al Horford and Kyrie Irving putting up additional baskets to close in at 91-90.

The Celtics led themselves in the position to foul against Evan Fournier. Fournier made each of his free throws and established the score for the night before a missed critical 3-point attempt from Kyrie Irving.

Brad Stevens spoke of his team’s poor start after the game.

“Our issue at the start of the game was providing enough physical resistance defensively. You know when the other team sets the tone that way, I think that’s hard to come back from,” Stevens said.

The Magic on the road

The Magic finished last season 8-33 on the road. If a turnaround is in sight, the Magic must continue to deliver performances like Monday night’s at TD Garden. Entering Monday night, the Magic came off of a defeat in Philadelphia. Despite the loss, Vucevic posted a triple-double with 27 points, 13 rebounds and 12 assists. A relatively young team relies on players like Vucevic, D.J. Augustin, Timofey Mozgov and Terrence Ross for veteran leadership.

The potential for change remains in the hands of new head coach Steve Clifford, who is the fifth head coach in six years for the Magic. Clifford joined the Magic after having coached the Charlotte Hornets for five consecutive seasons.

The Magic are now 2-2 for the season after Monday night’s win. They’ll return home to host the Portland Trail Blazers on Thursday, Oct. 25, with tipoff set for 7 p.m.

Previous Falcons Take Down the Giants 23-20
Next Gator football heads into Georgia Game without Distractions, Unlike Last Year