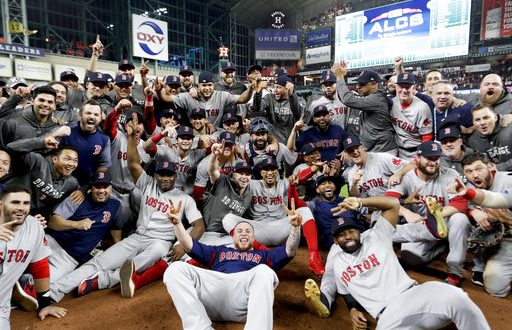 It all comes down to October

After winning 108 games during the regular season, cruising past the Yankees and the Astros in just 9 games, the Boston Red Sox are ready to take on the Los Angeles Dodgers in the World Series.

“We done a lot of work this year,” said Red Sox star player Mookie Betts. “108 wins, went through step 1 and step 2. When you make it this far you have to go ahead and win it. It’s still the same game so we have to go ahead and execute the same way we have done it all year. But this aspect is different for us.”

In order to reach their ninth World Series Title, the Red Sox will have to look to their bullpen. Their key players should be prepared to face Dodgers all-stars Cody Bellinger, Many Machado, Yasiel Puig, and Clayton Kershaw.

In this World Series many can see the Dodgers bullpen having a hard time try to contain the Boston hitting line up. With Mookie Betts at leadoff, followed by Andrew Benintendi, J.D. Martinez and Xander Bogaerts. All four are regulars regardless of whoever is on the mound. They’re also the best hitters Boston has to offer. But when the series moves to Los Angeles, Boston is going to have to put designated hitter Martinez on the field if they want to keep their second best player on the batting lineup. This may involve taking out ALCS MVP Jackie Bradley Jr.

As for the bullpen, they might have caused doubt throughout the Boston Faithful throughout the season and games 1 and 2 of the ALDS, but have been lights out in the rest post season. Relievers have been on fire only allowing one hit and two runs in the last two games helping out the struggling Craig Kimbrel and David Price. However, both have been able to find their form again in Game 5 vs the Astros.

Overall the bullpen for the Sox threw for 20 innings in the ALCS. The most noticeable was Rick Porcello, only allowing 4 runs and throwing for 18 K’s and Matt Barnes who did not allow a hit or run in the post season until his Game 5 appearance.

The Red Sox are big favorites on paper for many good reasons. However, the Dodgers are a team that can surprise anyone and we’ve seen that all month. In a series featuring upcoming stars, MVP’s, and smart veterans, it is really up for grabs. It could be as close as last year. If Boston can get their rotation correct when they go to L.A. and their pitching continues to throw heat they may call themselves champions in nine days.