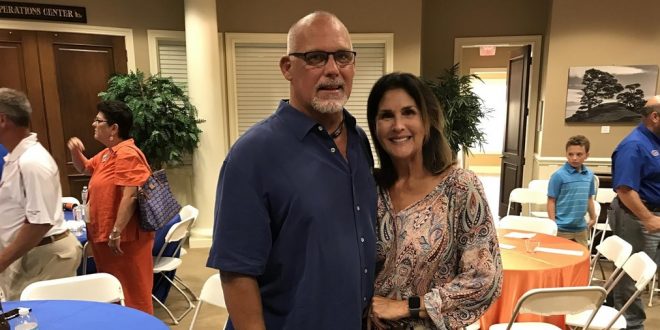 People are coming together to assist a Gator Great.

The Florida Sports Hall of Fame is holding a benefit in Tampa on Thursday from noon to 9 p.m. in support of former Gators and Buccaneers linebacker Scot Brantley.

Barry Smith, president of the hall of fame, said the event is to help with Brantley’s medical expenses associated with health issues from his football career. It was released in May 2018 that Brantley is suffering from Alzheimer’s.

The event is set to take place at the Original Hooters in Clearwater with Tampa’s 620WDAE sports station in attendance. The station will have a live broadcast of the Ron and Jay Show from noon to 3 p.m. at the location and will be back on again at 6 p.m.

Smith said a “nice percentage” of the money spent at the restaurant coupled with donations proceeds from the auction held will go into a fund for Brantley.

The establishment will have specials all day along with a FSHOF Patron Partners offering to be available.

He said the event will feature appearances from other athletes along with Brantley. Brantley himself and his wife Mary will be in attendance from 5 p.m. to 9 p.m.

Here are some notable attendees:

“Guys like Jack Youngblood will be driving all the way over from Winter Park to come on over late in the afternoon because of his respect for Scot,” Smith said.

How it Came to Be

Smith said the event was a collaboration between himself, WDAE’s Ron Diaz and Jan Richard of the FSHOF.

Barry Smith on the fundraiser’s growth:

He said they are raising money to substitute for the benefits they believe Brantley should have received from the NFL.

“Scot could probably run for mayor just about anywhere,” Smith said. “He has a ton of friends because Scot is just one hell of a guy.”

Smith repeatedly expressed the sentiment of the group wanting to help a dear friend in Scot Brantley.

All donations made will be forwarded to Brantley. Those willing to donate can make a check payable to Jan Richard, FSHOF Patrons and mail to Florida Sports Hall of Fame, 14370 91st Ave, Seminole, FL 33776. Include Scot Brantley in the memo line as well.