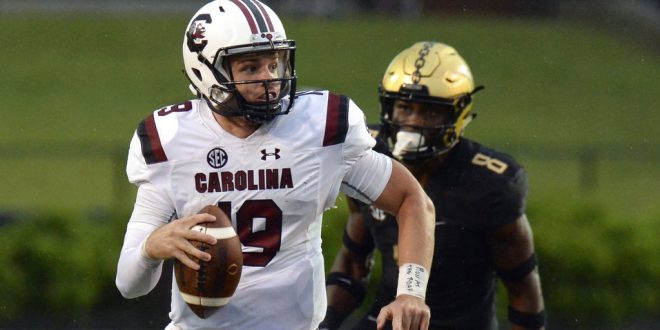 FILE - In this Sept. 22, 2018, file photo, South Carolina quarterback Jake Bentley (19) runs the ball ahead of Vanderbilt cornerback Joejuan Williams (8) during the second half of an NCAA college football game, in Nashville, Tenn. Back from a week off, South Carolina faces Tennessee on Saturday, Oct. 27. (AP Photo/Mark Zaleski, File)

This Saturday, the Tennessee Volunteers visit the South Carolina Gamecocks. The hosts currently sit in fourth in the SEC East, followed by Tennessee in fifth.

Both sides are coming off of home losses to SEC opposition, with the Volunteers losing 58-21 to Alabama and the Gamecocks losing 26-23 to Texas A&M. As a result, Tennessee dropped to 3-4 on the season overall, with a 1-3 record in the SEC. South Carolina dropped to 3-3, with a 2-3 record in the conference. South Carolina has played one less game, as their matchup against Marshall was canceled earlier in the season in preparation for Hurricane Florence.

Coach Jeremy Pruitt sees the game against South Carolina as a chance for his guys to rebound from last weekend’s loss. However, he has respect for Will Muschamp’s football team and knows it will be a challenge.

Although the Volunteers have been able to produce big-yard gains thus far, they’ve also had too many negative plays. These have negated a lot of good that the offense has produced.

Lastly, Pruitt addressed freshman running back Jeremy Banks‘ transition to linebacker. He believes that Banks will flourish in his new position in the future.

The Gamecocks have struggled on defense thus far. Coach Muschamp mentioned Eldridge Thompson‘s injury as a key loss to the defense with younger guys stepping in to replace him.

Muschamp explained what a coach needs to do when dealing with a young squad:

Tennessee will visit South Carolina this Saturday. The game will kick off at 7:30 p.m. and will be televised on the SEC Network.