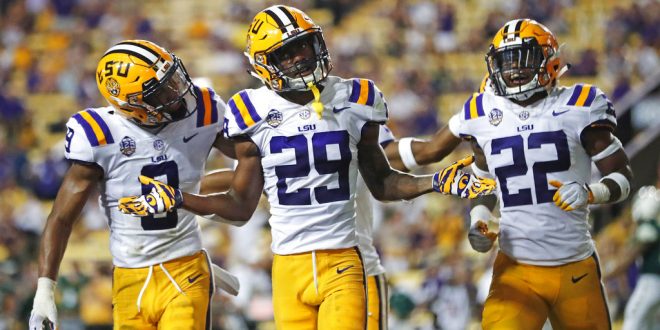 The fourth-ranked LSU Tigers are riding high in their bye week after dominating wins over No. 2 Georgia and No. 19 Mississippi State in consecutive weeks. The Tigers now have three top-ten wins on the season and control their own destiny in the College Football Playoff. However, with an upcoming matchup against No. 1 Alabama next week, the Tigers certainly have their work cut out for them.

Alabama would still have a 60% chance to make the @CFBPlayoff with a loss to #LSU pic.twitter.com/JhcF2cgEgi

LSU has been very assertive on both sides of the ball. Defensively, they have given up 15.1 points per game, which ranks 7th in the country. The Tigers also rank 5th in the nation in turnover margin at +12.

Linebacker Devin White is the leader of the defense and paces the team with 76 total tackles. However, White has been suspended for the first half of their game against Alabama after receiving a targeting call last week against Mississippi State.

Safety Grant Delpit holds down the secondary with five interceptions and four sacks on the season, both of which are team highs.

Offensively, the Tigers wear their opponents down from all aspects. Junior quarterback Joe Burrow is great at controlling the pace of the game. He has completed 120 of 223 (53.8%) attempts for 1,544 yards, six touchdowns and three interceptions. Burrow doesn’t have a huge arm and isn’t overly accurate, but the Ohio native is known as a “gamer” and has a tendency to make big plays in big moments. He has an overall quarterback rating of 118.2.

Senior running back Nick Brossette leads the rushing attack. He has 151 carries for 697 yards (4.6 yards per carry) and ten touchdowns. Clyde Edwards-Helaire has produced 105 carries for 521 yards and five touchdowns. No other back has received more than eight carries on the season.

Justin Jefferson leads all receivers with 30 receptions for 471 yards and two touchdowns. Burrow has done a great job spreading the ball around and keeping everyone involved. Six other receivers have posted over 100 yards.

Alabama has been the consensus top team in the country since week one. They have averaged 54.1 points per game, which is the most in the country. LSU head coach Ed Orgeron offered high praise for Alabama quarterback Tua Tagovailoa.

Orgeron went on to discuss the highly anticipated matchup between Alabama’s passing attack and LSU’s secondary.

If the Tigers manage to knock off top-ranked Alabama next week, they will be considered a favorite to reach the College Football Playoff. Even if they lose in the SEC Championship Game, their resume with four top-ten wins will certainly be hard to ignore. However, Ed Orgeron is not looking that far into the future. He only has one focus in LSU’s bye week: preparing his team for arguably the biggest showdown in all of college football.