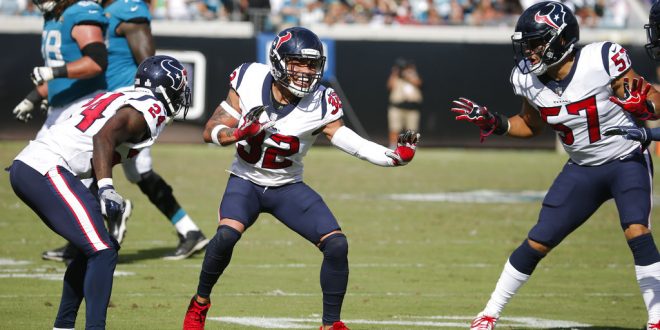 Houston Texans free safety Tyrann Mathieu (32) celebrates his interception against the Jacksonville Jaguars with teammates cornerback Johnathan Joseph (24) and linebacker Brennan Scarlett (57) during the second half of an NFL football game, Sunday, Oct. 21, 2018, in Jacksonville, Fla. (AP Photo/Stephen B. Morton)

The NFL season is almost halfway completed. Week 8’s Thursday night football game will be the Miami Dolphins at the Houston Texans. This is the first meeting of the teams since 2015. Kickoff is set for 8:20 p.m.

Playing in primetime for Thursday Night Football means a shorter preparation week. However, the Texans get to be at home this week as they look to add to their four-game win streak. Thursday’s game will be Houston’s second game in a row playing a Florida team. Last week they played in Jacksonville and handed the Jags their fourth loss of the season. The Texans easily beat them 20-7.

One player that will be happy to be back home at NRG Stadium is quarterback, Deshaun Watson. He has been playing through a chest injury for three weeks now that also has prohibited him from flying to games. Watson chose a 12 hour bus ride to Jacksonville to be sure to play in last weeks’ game.

As he prepares for the Dolphins this week, Watson says he is trying to rest up as much as he can and watch as much film as he can before Thursday night. One area he wants to improve in his capitalizing in the red zone.

Watson has passed for 1,937 yards and has recorded eleven touchdowns this season. Houston is 2-1 at home this year and they are sitting at No. 1 in the AFC South.

Last week the Dolphins lost at home to Detroit, 32-21. Thursday’s game will be Miami’s third game without starting quarterback, Ryan Tannehill as he is still out with a shoulder injury. Brock Osweiler will get the start under center for his third game in a row. Osweiler was with the Houston Texans for the 2016 season and when he was asked what it would be like to play against his former team, he said he is treating it like any other game.

The Dolphins had a good start to their season but since Week 3 they’ve been up and down with wins and losses. Miami sits 2nd in the AFC East right behind the Patriots.

Both teams have a list of injured players going into their Week 8 game.

Thursday’s primetime game will look to be a battle of which team can stay healthy. With the playoffs on the horizon, both of these teams do still stand a chance for an AFC playoff spot.

Junior studying telecommunications- news at the University of Florida. Multimedia Sports Reporter for ESPN Gainesville as well as a Multimedia Journalist for WUFT News.
@acheney21
Previous Miami Heat bounce back for blowout win over New York Knicks
Next LSU Preparing for Top-Ranked Alabama in Bye Week