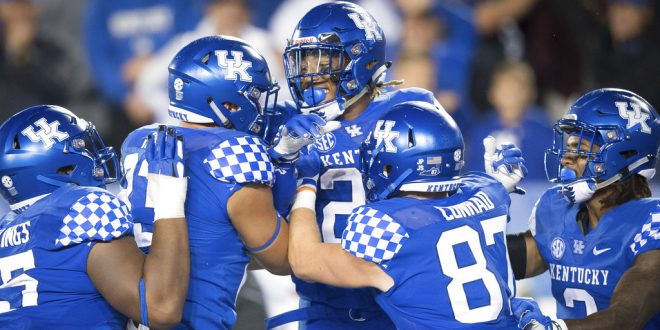 Jr. (26) celebrates with teammates after scoring a touchdown during the second half of an NCAA college football game against Mississippi State in Lexington, Ky., Saturday, Sept. 22, 2018. (AP Photo/Bryan Woolston)

The college football landscape is sure to shift again this weekend. Lots of games around the country have major playoff implications. Inside and outside the power 5. Its shaping up to be an entertaining weekend of football. These are three of biggest matchups taking place outside the state of Florida.

No. 12 Kentucky vs Missouri

Kentucky enters week 9 of the season ranked 12th in the country.

Mark Stoops is having his best season so far as Wildcats head coach. They are loaded with talent on defense and have an elite playmaker on offense in. They have the leading rusher in the SEC, Barry Snell.

Missouri is currently without an SEC victory this season, but they look to change that at home this weekend. Vanderbilt and Missouri remain the only SEC East schools without a single SEC win.

Kentucky will face maybe the most dangerous quarterback they’ve seen all year; Drew Lock. It’s going to be a fun matchup. If Kentucky can escape with a victory they might move into the AP top 10 for the first time since 2007.

Kickoff is slotted for 4 p.m. Saturday on SEC Network.

Penn State still has a shot at the BIG 10 title game despite two losses.

They will need help from Ohio State to make it, however they’ve proven inconsistent after a surprising defeat against Purdue last week.

Penn State certainly has the advantage this weekend on offense with their quarterback Trace McSorley. However, the head coach of Penn State, James Franklin, believes if his team is going to be successful, the role players around McSorley must step up. Even if McSorley gets the help he needs, it will be difficult for them to keep the Hawkeyes off the board. Iowa has scored an average of 38 points over its last three contests.

Last week Mike Leach pulled out all the stops to win over Oregon, a game that featured some experimental formations.

It will be interesting to see what Leach pulls out of his hat this weekend when his team visits Stanford. Stanford’s defense hasn’t been very elite in pass defense so far this year. They will receive their toughest matchup in that respect. The Cougars starting QB, Gardner Minshew, leads college football in passing yards.

By the way — here’s that bananas formation WSU ran for a couple of plays. Mike Leach is at it again … pic.twitter.com/qz4C48epEY

Previous Smart, Georgia look to bounce back against Florida
Next Florida Volleyball on the Road in Starkville