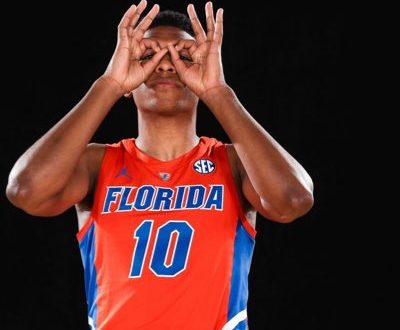 Freshman Noah Locke is ready for his first game at Florida

Noah Locke is a freshman shooting guard for the Florida Gators Men’s Basketball team this year.  Locke, a Randallstown, Maryland native was a four-star prospect and one of the top shooters in the nation’s 2018 class. He is expected to be part of this years talented backcourt scoring punch with his killer three-point shooting potential.

The official season for the Gators doesn’t begin until November 6th, however, they will play their first exhibition game of the season tonight against the Florida Southern Moccasins. While this is the first game of the season for Locke and the Gators, it will also be Locke’s first time experiencing the O’Dome atmosphere. As a recruit, Locke never actually saw the Gators play in the Exactech Arena.

After weeks of scrimmaging, Locke and his teammates are ready to finally play someone else.

Locke is a brand new, freshman face on the Florida team. He says  overall, college basketball has been great so far. Locke also mentioned that he feels like hasn’t faced many challenges yet other than the college conditioning.

The young shooting guard is expected to bolster the Gator’s backcourt this season with his long-range shooting abilities. Locke was his high school’s all-time leading scorer with over 2,300 points so he would like to think that scoring, and especially shooting threes, is what he does best.

Locke is one of three freshmen being welcomed into Gator Nation tonight in the Stephen C. O’Connell Center. Locke stands alongside Keyontae Johnson and Andrew Nembhard in this freshman class. Fans shouldn’t have to wait too long to get their first look at them, especially in tonight’s exhibition game. Gator Head Coach Mike White talked highly of the freshmen.

“These guys have been well coached and are a little more mature than the average freshmen,” he said.

Locke is eager to get out on the court and says that the Rowdy Reptiles and fans are going to give the team energy. The freshmen won’t have to wait much longer now to unveil his talents to all of Gator Nation.