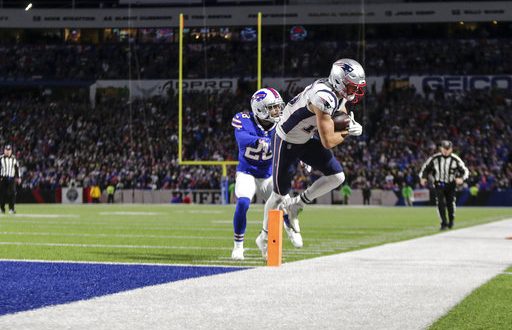 The New England Patriots entered Monday night the same way they left it: Reigning over the AFC East. But while the Buffalo Bills may have been the victims of a 25-6 loss. Monday night’s case wasn’t typical.

For the majority of the game, the Patriots squandered in redzone. So much so, Tom Brady put up zero touchdowns for the evening. But he consistently put the Patriots’ offense in decent field goal position when they couldn’t catch a break through the Bills’ defense. As a result, they turned to Stephen Gostkowski, who made four out of five field goal attempts for the night.

The Patriots’ two touchdowns came in the fourth quarter: A 1-yard rushing touchdown from James White, and an 84-yard return from Devin McCourty off of an interception.

Brady acknowledged just how much McCourty’s return factored in to the win.

“It was a great play, and we needed it. They made it tough on us, and that was a huge play in the game. We’ll take the win however we get it, and try to learn from it and move on next week,” Brady said.

Similarly, the Bills could not get anything going outside of kicker Stephen Hauschka. His two field goals summed up their entire offensive momentum. Quarterback Derek Anderson, who started in place of injured rookie Josh Allen, left the game with a 1:25. He finished for 22 out of 39 completed passes and two interceptions.

Allen is listed week-to-week with a sprained elbow on his throwing arm. He suffered from the injury in the Bills’ lost against the Texans.

Each team sits on opposing ends of the AFC East, with the Patriots at 6-2, and the Bills at 2-6.

The Patriots enter Week 9 hosting the Green Bay Packers on Sunday, while the Bills face the Chicago Bears at home.

Previous Andrew Nembhard: Five-Star Freshman for Florida Basketball
Next Freshman Noah Locke is ready for his first game at Florida