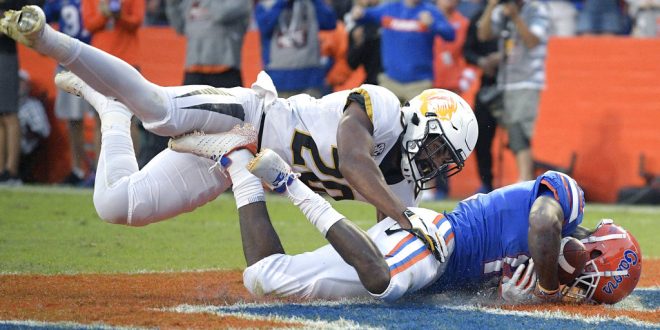 Florida wide receiver Josh Hammond, right, catches a pass in the end zone in front of Missouri defensive back Khalil Oliver (20) for a 7-yard touchdown during the second half of an NCAA college football game Saturday, Nov. 3, 2018, in Gainesville, Fla. (AP Photo/Phelan M. Ebenhack)

Hammond Says All QBs Can Play

With the Gators down 35-10 late in the third quarter Saturday, Kyle Trask, in for the benched Feleipe Franks, threw a short seven-yard pass to wide receiver Josh Hammond in the end zone. Touchdown.

Florida pulled within 18 points but ultimately failed to close in on the Tigers and dropped a 38-17 loss at home.

That would be the Gators’ second straight loss to Missouri and second loss in a row overall. With the quarterback situation in the air, he shared his thoughts on the movement at the position.

Following a 9-for-22 and zero touchdown performance, quarterback Feleipe Franks was taken out of the game late in the third quarter. Head coach Dan Mullen sent in redshirt sophomore Kyle Trask, who tossed the quick strike to Hammond. Trask finished the game 10-for-18 with 126 yards and one touchdown.

Hammond said he was able to execute really well at a high level.

Mullen said they will see how it goes in practice this week in terms of evaluating a starter for this weekend. There could be two or three options under center for Mullen when the Gators host South Carolina on Saturday. Hammond said all three quarterbacks do things well and are still competing for that spot.

Despite the uncertainty about who will get the start, he said it doesn’t change anything offensively or how they prepare.

A familiar foe rolls into Gainesville this weekend as the South Carolina Gamecocks and Will Muschamp are set to take on the Gators. Muschamp’s presence is still felt among some veteran players, particularly those who were recruited by him. Hammond talked about how much it means to some players when Florida faces South Carolina each year.

The Gamecocks come into this matchup on a two-game winning streak (most recently defeating Ole Miss 48-44) and have the same 4-3 conference record as the Gators. South Carolina is fifth in the SEC in points per game (31) but average 27.9 points against per game (73rd overall).

Both sides will face an early start as kickoff is set for noon E.T. on ESPN.