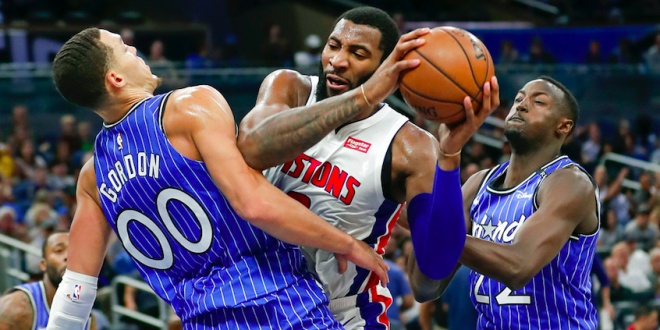 Detroit Pistons' Andre Drummond, center, tries to get to the basket between Orlando Magic's Aaron Gordon (00) and Jerian Grant, right, during the first half of an NBA basketball game, Wednesday, Nov. 7, 2018, in Orlando, Fla. (AP Photo/John Raoux)

The Orlando Magic is now 4-7 on the season after falling 103-96 to the Detroit Pistons. Things seemed to be looking up for the Magic after back-to-back wins over the Spurs and the Cavaliers. But, blowing two double-digit leads against Detroit put the Magic in familiar (not friendly) territory.

First quarter play was strong in Orlando. The team forced the Pistons into seven turnovers and took a 15-point lead for themselves. Evan Fournier spearheaded the effort, scoring eleven of the team’s 31 points.

The Magic took a strong lead again in the third quarter. This time, leading Detroit by eleven. But, the Pistons tied it up early in the fourth and went on a run to win the game.

Fournier finished with 27 points and four of his teammates also finished in double-digit scoring. All in all, those five players combined for 87 of Orlando’s 96 points. Abysmal play off the bench, including Jarell Martin and Jerian Grant’s zero points each, was the determining factor in the loss.

After the game, Coach Steve Clifford did not hold back.

Not So Magic Seasons

Orlando went into the game looking for its first three-game winning streak of the season. Last season, the team was only able to do that twice. They ended the 2017-2018 season 25-57 and 14th in the Eastern Conference.

Firing longtime coach Frank Vogel looked to be the remedy for a struggling team. But, this season’s 4-7 record is still leaving a lot to be desired.

Next up, Orlando will play the Washington Wizards on Friday. Fortunately for the team, the Wizards are just 2-8.

Back at it on Friday when we host the Wizards. pic.twitter.com/2fhi4on2JT

Only one of these teams will get the Magic touch their mascots ascribe. Find out who it is tomorrow at 7 on Fox Sports Florida.