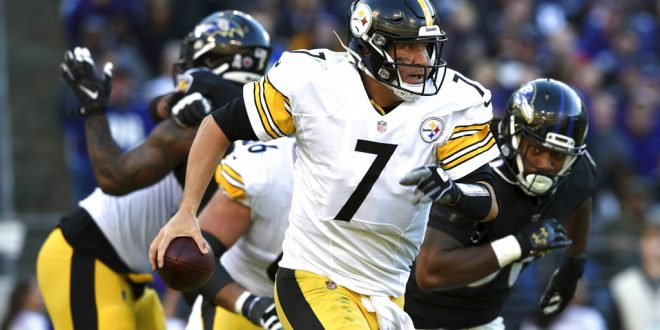 Pittsburgh Steelers quarterback Ben Roethlisberger looks for a receiver in the second half of an NFL football game against the Baltimore Ravens, Sunday, Nov. 4, 2018, in Baltimore. (AP Photo/Gail Burton)

A slow start out of the gates, the Steelers have made up ground in the division thanks to their 4-game winning streak, as they now sit atop the AFC North. The Steelers most recent tally in their winning-streak came against their bitter division rival Baltimore, beating the Ravens 23-16.

Quarterback Ben Roethlisberger and his offensive unit will have their work cut out for them going against a stingy Panthers defense that’s giving up 22.5 points per game. Head coach Mike Tomlin knows the challenges the Panthers defense can present.

The Steelers will look to continue to play well despite the distractions that have been thrown at them this season. Star running back Le’Veon Bell has still yet to return to the team from his holdout. Now on a short-week, Pittsburgh is only focused on the task at hand with the Panthers.

Like the Steelers, the Panthers enter Thursday night’s contest on a hot-streak, winning their last three. The Panthers are also coming off a division win where the offense was clicking, scoring 42 points to beat the Tampa Bay Buccaneers 42-28.

The Panthers come into the game at 6-2, however both losses have come on the road. Panthers quarterback Cam Newton knows how big the contest will be on Thursday night.

Newton has been the driving-force of the Panthers offense, as the former-MVP has accounted for 19 touchdowns this season.

The Panthers will be monitoring the health of center Ryan Kalil, safety Eric Reid and defensive end Mario Addison, who are all listed as questionable.

Both team’s will look to extend their respective winning-streaks, in what expects to be a heavily-contested matchup.

Kickoff is set for 8:20 p.m. from Pittsburgh, PA. You can listen to live coverage of the game on WRUF.