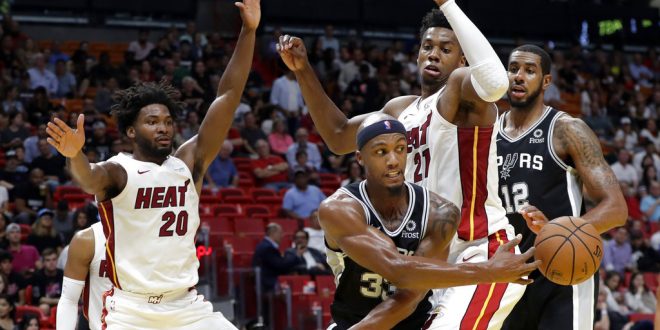 The Miami Heat cracked a four year losing streak to the San Antonio Spurs Wednesday night. Miami’s Hassan Whiteside stepped it up with 29 points, despite the absence of with of stars Dwayne Wade and Goran Dragic.  However, it was a bit of a lower scoring game for the Heat with the final score being 95-88.

San Antonio has now lost back-to-back games against the two Florida NBA teams. At home on Sunday they lost to the Orlando Magic 117-110 and after Wednesday night’s loss, they’re now sitting at a 6-4 record. Last night in the American Airlines Arena, the Spurs were only down by eight, 50-42, going into halftime. They looked like they might have had a chance after back-to-back baskets from Bryn Forbes late in the fourth quarter. Even though Forbes narrowed the deficit to just five points, San Antonio wasn’t able to pull away from Miami.

The Spurs did come away from Miami with some positives. Patty Mills, DeMar DeRozan and Davis Bertans were all standout players for San Antonio.

The Heat now sit at a 5-5 record after Wednesday’s dominating win. Unlike San Antonio, Miami has back-to-back wins. They beat the Pistons in overtime on the road in Detroit on Monday, 120-115.

Whiteside started the first half breaking a Miami Heat franchise record. He recorded eight blocks in the first half which also marked the most for any NBA player in a game this season.

The accolades for Whiteside didn’t stop there. He totaled 29 points, 20 rebounds and nine blocks. Miami led San Antonio the whole game other than the opening score and Whiteside was clearly a big reason for it. He was just one block away from recording his fifth career triple-double. His last one was two years ago. If that isn’t enough highlights, Whiteside shot 10 of 18 from the floor and 9 of 11 from the free-throw line.

San Antonio will have a few days off before hosting the Houston Rockets on Saturday at 8:30 p.m. and Miami will stay at home and host the Indiana Pacers on Friday night at 8:00.