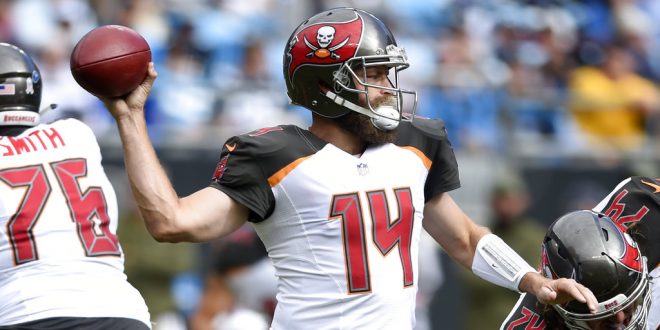 Tampa Bay Buccaneers' Ryan Fitzpatrick (14) looks to pass against the Carolina Panthers in the first half of an NFL football game in Charlotte, N.C., Sunday, Nov. 4, 2018. (AP Photo/Mike McCarn)

Bucs look to pick up win against tough Redskins team

As the second half of the season approaches, the Bucs have already had some quarterback controversy and a change at defensive coordinator, but still have some hope for the rest of the season.

The offense has been good, but to an extent

No matter who has been under center for the Bucs, the offense good and should be able to win more games for this team than it actually does. They rank first in pass yards per game and are second in total offense. The problem has been inconsistency at the position.

Whether it’s Ryan Fitzpatrick (a.k.a Fitzmagic) or Jameis Winston both have shown flashes of good football as well as some really bad games. With the aging of Fitzpatrick, poor decisions of Winston and the Bucs sitting at 3-5, questions about the future of the position and head coach Dirk Koetter loom over the team.

Much of this narrative could change with a win at home against the Redskins who currently sit atop the NFC East. With the Redskins ranking in the bottom half of the league in passing defense, Fitzpatrick will need to take advantage of the secondary if the Bucs are going to win the game.

Even with the Bucs defense being as bad as its been all season, they give up a league worst 34.4 points per game, don’t expect Alex Smith to go out there slinging it for Washington. The Bucs will have to lean on the offense and can’t afford to put themselves in a comeback situation like they have so many times this year.

Injuries will play a role

Star wide receiver Mike Evans and offensive lineman Demar Dotson returned to practice after as both suffered knee injuries. Evans will look to bounce back after only recording one catch last week and Dotson will be needed to slow down a strong Redskins pass rush led by Jonathan Allen and Matt Ioannidis.

One big issue for the Redskins will be how their offensive line fares with three starters missing. Adrian Peterson has been a welcomed surprise to the team this year, but may find some issues this week.

The Redskins have not trailed in their wins this season and haven’t led in their losses meaning if one team can get out to an early start, the game may be over quicker than people think.