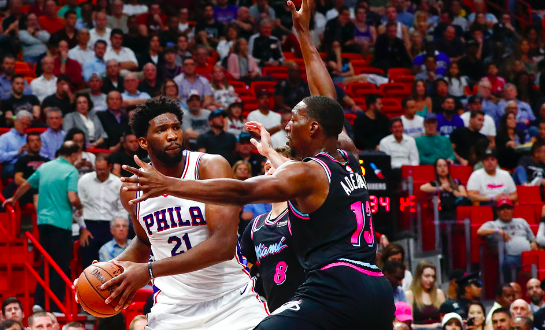 The Miami Heat continue to struggle in the early season, falling to the 76ers at home on Monday night with a final score of 124-114. The Heat have now extended their losing streak to three games.

This is the first time the two teams have met since the playoffs last season. Philly dominated the series between the two with taking five games in the first round.

An offensive explosion on the account of Joel Embiid and JJ Redick proved lethal for the Heat. Embiid finished the evening on a double-double, scoring 35 points and 18 rebounds, while Redick contributed 25 points.

Both teams remained closely within each other on the scoreboard for most of the game, but the Heat were able to create a 15-point deficit in the beginning of the second quarter. The separation was short-lived, with the Sixers catching up and even leading the Heat into halftime.

Goran Dragic lead the Heat in scoring with 22 points. Hassan Whiteside had a double-double of his own, but it wasn’t enough to match Embiid’s. Whiteside put up 13 points and 11 rebounds total.

A tortuous second half

The Heat gave up six turnovers in the third quarter, putting themselves in a difficult position. Foul trouble lead to forced lineup changes. Hassan Whiteside earned his fourth personal foul in the beginning of the quarter; this ultimately lead to Whiteside missing most of it on the bench. As a result, the Heat were left to double up on Embiid in the post, where the center fully capitalized.

The 76ers really started to extend their lead towards the end of the game. With 1:59 left in the fourth, Philadelphia got their first double digit lead of the entire night with Joel Embiid’s step back three with 1:59 left in the game. Then Miami fans were completely stunned with Philadelphia’s Ben Simmons got a hold for the ball and added a dunk for Philly’s next possession.

This win came only a few hours after the 76ers acquired star player Jimmy Butler from the Minnesota Timberwolves. The chance to see if this team will be even scarier will be on Wednesday when he makes his debut with the 76ers and they travel to Orlando to face the Magic. While Heat will travel to face off against the Brooklyn Nets in the same night.