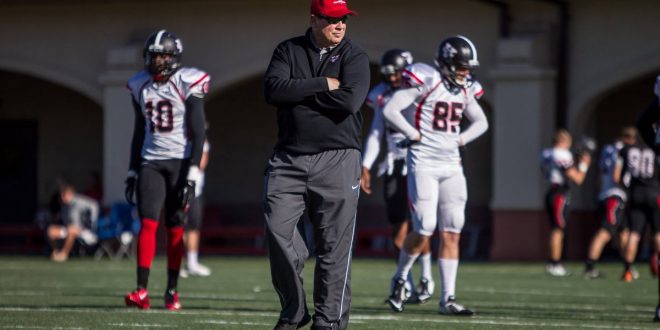 The Blazers have had an incredible season so far. They have been selected as the #1 seed in the Division II Playoffs.

Bell spent his early football years in North Central Florida before he even was a Gator.About an hour away from the Swamp is where Bell grew up. He played football for the Lafayette Hornets in Mayo, Fla.

After that he put on the Orange and Blue from 1983-87 as a walk-on quarterback for the Gators. Bell received his chance to start due to the other quarterback’s getting injured or transferring. Bell proved him self and ended up on a full scholarship. Helping the Gators finish a phenomenal season. Bell dabbled in the NFL and in the Canadian Football League but didn’t see the field much. He then pursued his coaching career.

A New Position for Bell

Bell was named new head coach of the Blazers in 2016 and has undoubtedly recreated the program.

This season they are currently 10-0. They’re ranked third and sixth nationally according to the AFCA Coaches and D2Football.com polls respectively.

The Blazers, most recently won the Gulf South Conference title this season.

Bell said when he started recruiting for his team he redshirted a bunch of players. He said he made the decision early to go with a young team that fit best into their program. Bell said they did struggle in the beginning but once they got their quarterback playing there was no stopping them.

Bell said he knew they had something pretty special and they worked hard this off season to improve his young team. He said their defense continued to get better and they even brought in some transfers to help in that area. He said he was confident going into this season they were going to play pretty well but he said he had no idea it would be at this level.

Blazing through the Season

The Blazers have been hot so far this season. They’re averaging over 40 points a game. Bell said they’ve been playing with four freshmen receivers, some young running backs and their quarterback: The Rogan Wells who won conference player of the year.

Bell’s own son, Kade Bell, has taken a part of this teams success as a graduate assistant for the Blazers. Kerwin Bell said he started by letting him do some play calling in the box. He said it worked well because his son was calling a lot of the same plays he wanted to do.

Valdosta state has three national titles under their belt with the most recent one in 2012. Bell has the Blazers fired up entering this Saturdays game. The team is facing undefeated West Georgia this Saturday. Kick-off is set for 7:00 at Bazemore-Hyder Stadium. Lets see if the Blazers can prove themselves and bring the heat this Saturday.