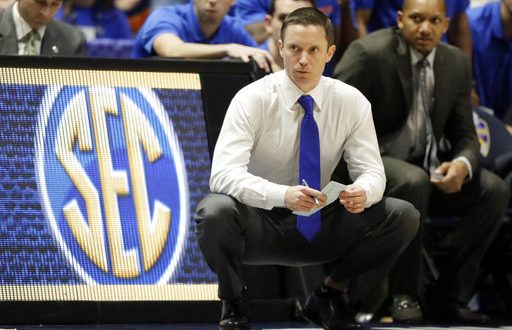 The Gator Men’s Basketball program won big during National Signing Day. Scottie Lewis, Tre Mann and Omar Payne – three incoming freshmen for the upcoming season – have sent National Letters of Intent to the University of Florida.  And all three of them rank in the top 35 of ESPN’s 100 rankings for the 2019 class.

These three Gators will be coming in just as three starters finish off their eligibility: KeVaughn Allen, Kevarrius Hayes and Jalen Hudson. Lewis, Mann, and Payne will have the chance to make key contributions to the Gator program.

The 6-foot-5, 185-pound small forward is a key pickup for Mike White and the Gators. He ranks 13th in ESPN’s 100 rankings, the highest ranked recruit who signed with Florida this season. And though he grew up in Hazlet, New Jersey, he has attracted national intention during his high school career. Lewis received offers from the likes of Duke, Kentucky, and Villanova. But Lewis made a verbal commitment to White and the Gator Nation in September.

Scouting reports say the five-star wing is an “explosive athlete and exceptional finisher.” In his junior year of high school, Lewis had 11 games where he scored at least 20 points. He has also participated in the 2016 USA Basketball Men’s Junior National Team minicamp.

This offensive-minded player will be critical to the Gators program as big-time scorers like Jalen Hudson will have completed their eligibility.

Let’s now take a look at one local who made the commitment to UF. Gainesville native Tre Mann attends The Villages Charter and has been a dominant player at his high school. He averaged 20 points and nearly 6 rebounds a game last season. Scouting reports call him a scoring guard “with good length who’s also a solid athlete.” Though he sparked interest from Kansas and Louisville, Mann chose to stay close to home. He made a verbal commitment to Florida earlier this year.

Mann is rated a five-star prospect by 247Sports and a four-star by ESPN. He is rated 30th in the ESPN 100 rankings. He also participated in the 2018 Pangos All-American camp. The 6-foot-4, 185-pound combo guard will be exciting to watch in the upcoming seasons.

Last, but certainly not least, Omar Payne. The Monteverde Academy player is a big man to who will be a help around the basket. He sits at 6-foot-9. The power forward received attention from several schools in the Southeast. The scouting report on 247Sports describes him as having “the size and frame of a developing NBA power forward.” ESPN ranks him as four-star and rates him 35th in the 100 rankings.

With his 7-foot-5 wingspan, Payne is expected to have a major defensive impact on the court. He is also said to have the ability to guard at multiple positions. Having a versatile player, defensively, will be a key addition to the team.

Arguably Coach White’s best recruiting class yet, Gator fans are in for some fun upcoming seasons.