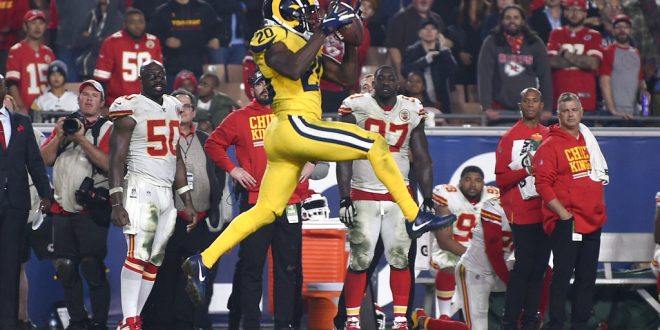 It was hyped up to be the “Game of the Year” and it exceeded all those expectations and more. The Los Angeles Rams may have bested the Kansas City Chiefs 54-51, but both teams had some MVP performances throughout the night. It was also the first game in NFL history where both teams scored 50 points.

Chiefs quarterback Patrick Mahomes had himself a great night. He threw for a career-high 478 yards. His six touchdown passes ties his career best and was a record for Monday Night Football.

“The turnovers just changed the game. I think I gave them 21 points pretty much through turnovers,” Mahomes said. “And just kind of like I said at the New England game, you can’t give good teams points from turning the ball over. That was pretty much the changing point of the game.”

Rams quarterback Jared Goff also had a good night for himself. He completed 31 of 49 throws for 413 yards and four touchdowns – including the beautiful game-winner, a 40-yard, over-the-should pass to Gerald Everett with 1:49 to go.

Defensive tackle Aaron Donald, the league leader in sacks, had two big strip-sacks last night. It was Donald and Ebukam whose games really stood out.

Chiefs head coach Andy Reid said the sacks were not as much on Mahomes as they were on Donald.

“Game of the Year”

Between the two of them, the Rams and Chiefs gained 1,001 yards: a total of 827 through the air and 174 on the ground. There was 14 touchdowns, seven turnovers, seven punts and a total of 144 plays. The combined score of 105 points was the third highest in NFL history. It was football at its finest.

Different athletes on social media were weighing in about the game, going crazy over how good it truly was.

This game is wild! Love it.

This game is going to have ppl on the east coast calling in late to work tomorrow. #Unbelievable

Both teams will be in action next Sunday, Dec. 2. The Rams will take Lions and the Chiefs will play the Raiders.

Courtney Mims is a junior telecommunications major at the University of Florida. She enjoys covering all Gator sports and drinking gallons of Starbucks coffee while doing so.
Previous The Gator Volleyball Team Wins Twice, Signs UGA Transfer
Next NHL: Predators Were Too Much for Lightning in 3-2 Loss