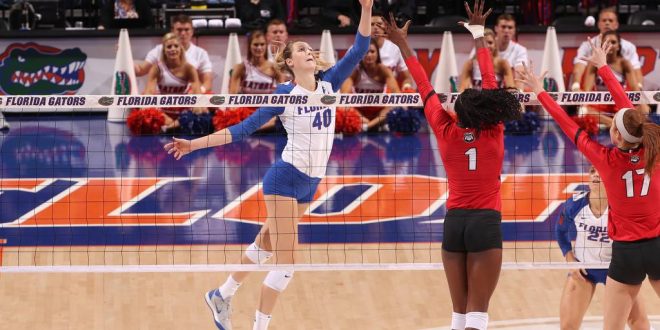 The No. 13 Florida Gator Volleyball team picked up three wins: one against LSU, and two from Georgia. However, not both of Georgia’s wins were on the court. Sophomore T’ara Ceasar signed with the Gators Monday and will transfer from the University of Georgia in January.

The former Bulldog player was named SEC Defensive Payer of the Week in September and SEC Freshman of the Week seven times during the 2017 season, according to FloridaGators.com. Ceasar led all freshman in points per set in all conferences that season.

“This was a very hard decision to make; however, I wish nothing but the best for the University and for Georgia’s volleyball program to continue to prevail,” Ceasar said. “I am excited for the opportunities that may lay ahead for my future and what God has in store for me.”

Florida Gators volleyball head coach Mary Wise said, “Even though she will only be playing here two years, she’s going to leave her mark. It’s going to be in the record book, it’s going to be with our family, and Tara will be a part of Gator Volleyball for years to come.”

Ceasar is no stranger to the Gators. She played with Thayer Hall and Rachael Kramer on the USA Women’s Collegiate National Team in China in the Summer of 2018.

Another Victory Over UGA

Florida swept Georgia in Athens Sunday, moving to 23-5 on the season and 14-2 in the SEC. Sitting at second place in the SEC behind the eleventh-ranked University of Kentucky. Meanwhile, the Bulldogs drop to 13-14 on the year, and 4-12 SEC.

Junior Libero Allie Gregory led the team defensively with 18 digs, averaging 6.0 digs per set. Her effort did not go unnoticed as she was named the SEC Defensive Player of the Week Monday, earning the title for her first time at UF.

The Gators combined for 10 blocks, five from Holly Carlton and a team-best six from Rachael Kramer.

Rachael Kramer registered 11 kills, marking her 12th match in double-digit kills this season. Kramer reached a season-best .667 hitting percentage. Paige Hammons was behind her with six kills, and Taelor Kellum and Holly Carlton followed closely with five kills each. Hammons and Kellum both hit over .350 in the three sets.

For the 26th time this season, Allie Monserez led the team in assists. She recorded 17 assists and her sister, Marlie Monserez, followed behind with eight.

The Gators travel to Knoxville, TN, to face the Lady Volunteers Wednesday at 5 p.m. Florida then returns home Friday to take on South Carolina in their final game of the regular season at the Exactech Arena.

Kate Venezio is a fourth-year telecommunication-news student at the University of Florida. Kate does it all: Behind the camera she captures emotional moments as a photographer for the University of Florida Athletic Association. She's comfortable being in front of the camera, too. Kate interviews players, coaches, fans and family members for pre- and post-game coverage as a beat reporter for ESPN Gainesville/WRUF-FM. In addition, Kate produces the sports segment for the weekly WUFT News program. There, she's responsible for writing the script in its entirety to include production commands. The presentation includes video highlights and interviews taped and edited, and Kate then live anchors the final package on a daily deadline. In addition, she writes stories for wruf.com where she informs sports fans of local, state, and national trending topics. Kate also utilizes social media as a tool to help get the stories in front of viewers.
@@kate_venezio
Previous Michigan vs. Ohio State: “The Game” Preview
Next Rams Get Big Win over Chiefs in Record-Breaking Monday Night Football Game