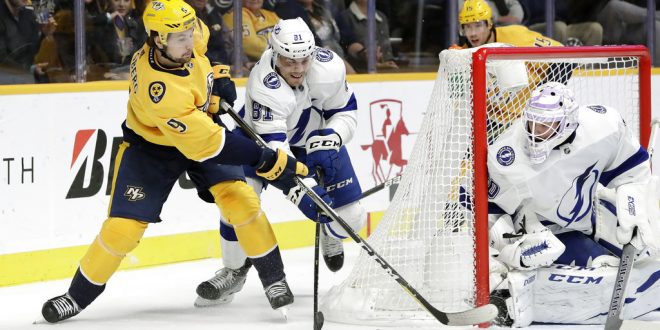 For the second time this season, the Tampa Bay Lightning fall to the Nashville Predators 3-2 in their final game of their four-game road trip. The Lightning have had some issues recently with digging themselves a hole early in the game. The Lightning scored first, but then allowed three goals to find themselves in a position to come from behind.

With this loss, the Lightning, now 21-14, fell to second place in the Eastern Conference. The Toronto Maple Leafs now own the top seed in the East on a one-game advantage. Meanwhile, the Predators (21-15), maintain their first place standings in the Western Conference.

Victor Hedman opened up the scoring just inside the first six minutes of the first period. Goalie Louis Domingue began the scoring play as it developed into a three-pass score to set up Hedman off a slap shot from the left side at least 15 feet out.

It took just 10 minutes afterwards for the Predators to tie up the score. Kyle Turris scored in the final three seconds of a power-play that became extremely beneficial for the Predators. Turris was left wide open and lasered it off Domingue’s left arm to find the back of the net with 4:41 left in the first period. At this point, the Predators were leading in total shots 11-6.

great flex and it's more than ok. pic.twitter.com/TQTPwlr75y

Four minutes later, right wing Craig Smith shot from 20-feet out and was tipped mid-air by Ryan Johansen inside the goal to boost their lead 3-1. The Lightning had as chance to answer late in the second, when Alex Killorn scored with 2:00 left in the second that was eventually waived off due to a violation committed by Killorn. the instant replay showed Killorn intentionally tripping defender Ryan Ellis to get the open lane.

The third period started off booming with a great goal by Nikita Kucherov just three and a half minutes in. The play began with Breydan Point swerving through three defenders to set up a great assist to Kucherov who eventually fakes out goalie Pekka Rinne.

Score was 3-2 and the Lightning were creeping up on shot attempts 22-29.

The Predators allowed three final second shots in a wild scramble for the puck. Rinne lost sight of the puck as it was sliding into the net but Mattias Ekholm saved the Lightning’s best chance from tying the game and helped improve their win-streak to two.

The Tampa Bay Lightning begin their five game home stand against the Florida Panthers in an inner-state rivalry on Wednesday night. Game starts at 7:30.

As for the Predators, they finish off their three-game home stand against the St. Louis Blues Wednesday night at 8:00.

Recent grad from the University of Florida. Editing all articles on here while helping out the newbies. Love all things basketball.
@@MarcoJMartinez_
Previous Rams Get Big Win over Chiefs in Record-Breaking Monday Night Football Game
Next Buccaneers Look To Turn Losing Streak Around Against 49ers