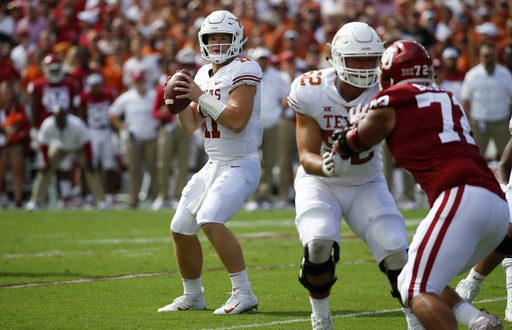 The No. 14 Texas Longhorns (9-3) are hoping to clinch their first Big 12 Championship since 2009 this weekend. But, they’ll be going up against the No. 6 Oklahoma Sooners (11-1) who will be looking to redeem themselves after falling to Texas earlier this season.

The Longhorns got the best of the Sooners the first time around 48-45 back in October. In their first meeting, Texas quarterback Sam Ehlinger threw for 314 yards, completing 24 of 35 pass attempts, and ran 19 times for 72 yards.

In the fourth quarter, Ehlinger came up big, leading his team down the field to set up the game-winning field goal with nine seconds left.

Longhorn receiver Lil’Jordan Humphrey also had a productive game with nine catches for 133 yards, along with a touchdown pass of his own. Texas will need a repeat of these performances if they want to fend off a hungry Oklahoma team.

Playing a good team once is hard enough, but playing them twice in one season poses an even greater challenge. Oklahoma has now had time to improve on the areas that caused them to fall just short last time, so this weekend’s matchup will almost certainly be even tougher for the Longhorns.

Texas head coach Tom Herman says he knows this will be the most challenging part of the game for his team.

Although these two teams are very familiar with each other, this matchup is different from all the ones that have come before. And the fact that this game has the added weight of a conference championship makes it that much more important to be highly motivated to get a win, according to Herman.

Herman’s team has had a very successful season so far, and a win in the conference championship over the No. 6 team in the nation would top it all off.

Herman says his team is worthy of being in this position, though, even though he understands Oklahoma is going to give them all they can handle come Saturday.

The Big 12 Championship game will take place Saturday at noon at AT&T Stadium in Arlington.