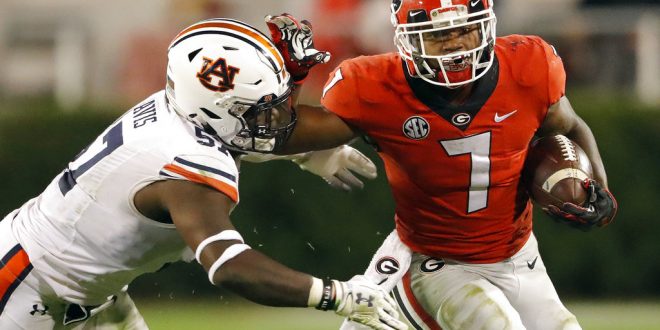 The Georgia Bulldogs and Alabama Crimson Tide have much more on the line than a SEC Championship. The winner will also clinch a berth into the College Football Playoffs, which will leave them two victories away from being crowned a national champion. This is a rematch of last year’s national championship game, where Alabama defeated Georgia 26-23 in an overtime thriller.

While both teams lost numerous key pieces to the NFL, they also boast a plethora of crucial returning players that have fueled their success this season.

What to Expect From Georgia

On Georgia’s roster, there is no one more pivotal than quarterback Jake Fromm. The true sophomore has completed 161 of 233 attempts (69.1%) for 2,236 yards, 24 touchdowns and five interceptions. His total QBR of 86.1 ranks third in the country, only behind Oklahoma’s Kyler Murray (96.1) and Alabama’s Tua Tagovailoa (95.9).

With Georgia’s elite depth at just about every position, they have not needed to rely heavily on Fromm. He has only attempted more than 24 passing attempts in a game once this season, and that was in their lone loss to LSU. Fromm continues to be one of the elite signal callers in the country.

Holyfield mentioned how having this running back committee is beneficial for himself and the entire team.

Holyfield also discussed how the Bulldogs have rebounded and improved after their 20-point loss to LSU.

Fromm doesn’t necessarily have a go-to receiver, with five different receivers accumulating over 300 yards on the season. Mecole Hardman paces the group with 32 receptions for 519 yards and six touchdowns, while Riley Ridley has added 34 receptions for 450 yards and eight touchdowns.

Fromm acknowledged the team’s overall growth over the past few seasons.

However, Georgia’s biggest challenge is the Alabama defense. The top-ranked Crimson Tide ranks second in the country in points per game (49.0) and fourth in total yards.

The Dawgs have more to worry about in addition to Alabama’s dynamic defense. Tua Tagovailoa is arguably the best quarterback in the country and is favored to win the Heisman Trophy. He has completed 189 of 269 attempts (70.3%) for 3,189 yards, 36 touchdowns and two interceptions.

The Alabama running game is split between the dynamic trio of Damien Harris, Najee Harris and Josh Jacobs. Let’s take a look at the statistics for all three players:

All three players bring completely different yet productive skill sets. It will be extremely difficult for Kirby Smart and his defense to come up with a formidable game plan against Alabama’s rushing attack.

The main receiver Georgia needs to focus on is Jerry Jeudy. The sophomore is arguably the best receiver in the country. He has 56 receptions for 1,079 yards and 11 touchdowns on the season.

The SEC Championship game will be played on Saturday, December 1st at 4:00 p.m. in Atlanta. The game is scheduled to be aired on CBS.