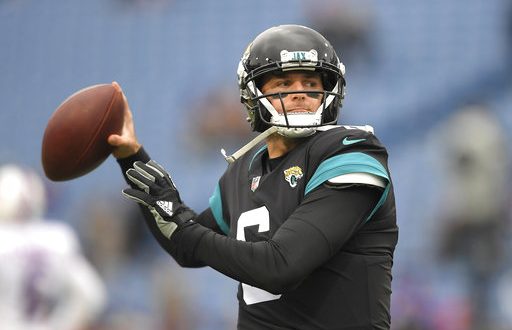 After the Jacksonville Jaguars experienced their seventh consecutive loss on Sunday, the team made some serious changes to their offense. Within hours after the Jags announced it had fired offensive coordinator Nathaniel Hackett, the team announced Cody Kessler will be the starting quarterback for Sunday’s game against the Indianapolis Colts.

Coach Marrone announces that Cody Kessler will start at QB on Sunday against the Colts. pic.twitter.com/8z2YKauDWg

Former starting QB Blake Bortles finished Sunday’s game against the Buffalo Bills with one his worst performances of the season. Bortles completed only 12 of 23 passes for 127 yards in the 24-21 loss. This season, the quarterback has completed an average of  60.4 percent in passes with 10 picks and 13 touchdowns.

“I had the chance to talk to both Blake and Cody earlier today, and I told both those guys the same thing–I’m making this change to give us an opportunity to win a football game,” Coach Doug Marrone said on Monday.

Sunday’s game will be the first time since 2016 Kessler will start in an NFL game as he started eight games for the Clevland Browns. It will be interesting to see Kessler’s performance for the Jags on Sunday as this will be the second time he’ll play behind center this season. Kessler’s made an appearance during Week 7 after Bortles was benched at halftime after he lost two fumbles and threw only 61 yards against the Houston Texans. He finished the second half completing 21 of 30 passes for 156 yards, one touchdown and one interception. The quarterback was a third-round selection in the NFL 2016 draft from the University of Southern California by the Cleveland Browns. He joined the Jags after an offseason trade.

Kessler is excited to take on this role.

“It’s a great opportunity… it’s tough to get opportunities in his league,” Kessler said.

The Jaguars will host the Indianapolis Colts on Sunday, December 2 with kickoff set for 1 p.m. EST. In addition to the many changes on offense, running back Leonard Fournette will not play on Sunday. Fournette is currently serving a one-game suspension for his actions in the fight that broke out last Sunday.

@sophialafrance
Previous Texas Looking For Second Win of Season Over Oklahoma in Big 12 Championship
Next No. 1 Alabama looks to remain undefeated as they enter the SEC Championship