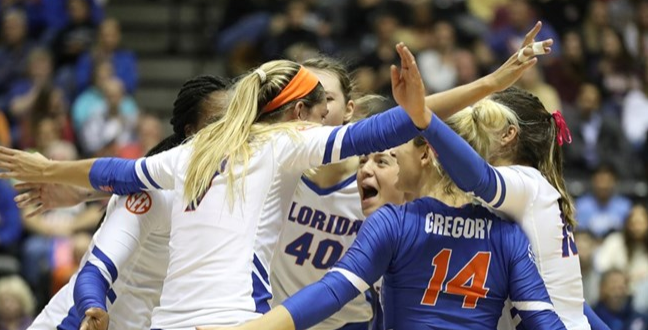 Gators Face Off with Eagles in NCAA Second Round

Florida will go from playing a team it saw almost three months prior to a team it hasn’t seen since 2012.

FGCU started its first NCAA tournament appearance in school history with a bang. They upset the host team in the No. 13 UCF Knights Thursday night to advance past the first round.

How They Pulled It Off

FGCU Basketball isn’t the only Eagles team that can make a splash come tournament time.

It took five sets, almost 200 swings and multiple double-doubles to take the match.

They were led offensively by sophomore outside hitter, and ASUN Player of the Year, Cortney VanLiew. She registered a double-double with 25 kills on an superhuman 79 swings and providing on defense with 12 digs.

Her pin-hitting counterpart, Snowy Burnam was another one of the five Eagles players to record a double-double in the match as she tossed in 15 kills and 26 digs.

For the first time ever, @FGCU_VB not only wins a NCAA Tournament game, but also defeats a ranked opponent!#NCAAVB pic.twitter.com/iWmGnLjphe

“Obviously we haven’t done something like this before, but winning the conference championship for the first time, now going through this experience,” Head Coach Matt Botsford said. “It’s just special for me to see that.”

Statistically, the school from Fort Myers holds the advantage in most major categories in a head-to-head comparison with Florida.

That upset was no fluke. This is an Eagles team that dominated the awards circuit in the ASUN 2018.

Congratulations to Cortney VanLiew (@my_girl_c_liew) for being named the program’s first-ever UNANIMOUS ASUN PLAYER OF THE YEAR!! pic.twitter.com/QQbstbgPyv

Florida will take on the Eagles Friday night at 7 p.m. It can be seen on UCFKnights.tv and heard on the air waves of ESPN 98.1 FM/850 AM WRUF.