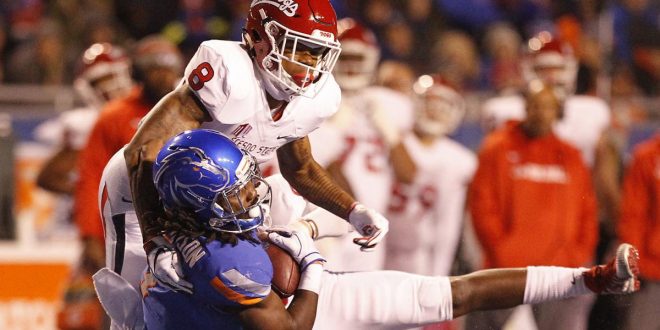 For the second time this month, The Bulldogs travel to Boise to face the Broncos. The game is tomorrow at 7:45 p.m. on ESPN. This time, the stakes are much higher.

They will be playing for the Mountain West Title for the second consecutive year.  Last year, Boise State won 17-14 to secure the title.

Fresno State is also seeking revenge for a 24-17 defeat several weeks ago. The Bulldogs jumped out for a large early lead thanks to some shifty maneuvering in the pocket by QB Marcus McMaryion as well as an interception in the end zone by Fresno State’s sophomore DB Juju Hughes.

They even got the benefit of the doubt on a 4th & goal in which Ronnie River coughed the ball up on the goal line, but it was ruled a touchdown for the Bulldogs anyways.

The second half was a different story. Boise State’s running game came to life, led by Andrew Mattison, who finished with two touchdowns and 144 yards. However, the Broncos took the lead when Khalil Shakir broke free for a 49 yard touchdown thrown by Brett Rypien:

After coming so close, the Fresno State players were hoping to get another chance to settle the score. Bulldogs coach Jeff Tedford suggested that they may have been a little too amped up in the last matchup to perform at their highest level, but they will enter this game with a level head.

The environment he’s referring to is the blue-turfed Albertsons Stadium, which holds upwards of 30,000 fans on any given night. “The energy, the juice… it was coming from the crowd, and it certainly made a difference,” said Boise State head coach Bryan Harsin.

But does it actually make a big difference? It’s worth mentioning that Boise State’s game attendance has been declining this year. Perhaps the play of senior Brett Rypien, who holds Mountain West Conference records for completions, passing yards, and total yards will be the key. If he shows up to play, there may not be much that Fresno State can do to stand a chance.