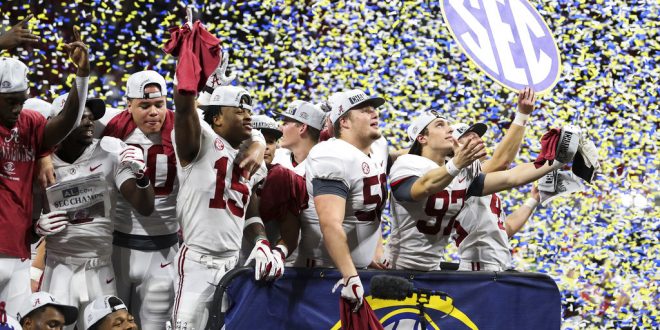 Alabama players celebrate after a win over Georgia during an NCAA college football game for the Southeastern Conference championship Saturday, Dec. 1, 2018, in Atlanta. (AJ Reynolds/Athens Banner-Herald via AP)

11 of the 14 Southeastern Conference Football teams will be playing in bowl games in 2018. After Christmas, SEC fans will be flooded with games from some of their favorite teams to watch.

The College Football Playoff will feature just one SEC team this year. The dominant, No.1 ranked Alabama Crimson Tide will face off with the No. 4 Oklahoma Sooners in the Orange Bowl in Miami Gardens on Dec. 29th. The winner of this semi-final game heads to the National Championship game where they will face the winner of the Cotton Bowl between the No. 2 Clemson Tigers and the No.3 Notre Dame Fighting Irish. The 2019 National Championship game takes place on Jan. 7th.

#CFBPlayoff Semifinal at the @OrangeBowl.

Six of the seven SEC East teams will be featured in bowl games this season.

The Georgia Bulldogs finished at the top of the SEC East this season, but unfortunately for them, they just couldn’t pull out a victory against the Crimson Tide in the SEC Championship last Saturday. The Texas Longhorns suffered the same fate as they lost to the Oklahoma Sooners in the Big 12 Championship Game on Saturday as well. Both the Dawgs and the Longhorns will be looking for redemption in their matchup in the Sugar Bowl in New Orleans on Jan. 1st.

Kentucky shocked the world this year and proved to just maybe be more than a basketball school. Both the Nittany Lions and the Wildcats finished at 9-3 during the regular season and will look to tack on one more win when they face off in the Citrus Bowl on Jan. 1st in Orlando at the Camping World Stadium.

So we meet again. This will be the third time since 2015 that the Gators and the Wolverines will matchup. The odds are swung in favor of Michigan with the recent series currently at 2-0 in their favor. The Gators will surely look to gain redemption and give fans a belated Christmas present this year when they take on the Wolverines in the Chick-fil-A Peach Bowl on Dec. 29th in Atlanta.

It's been an incredible season… but we're not done yet.

The Gamecocks will be taking on the Virginia Cavaliers on Dec. 29th in the Belk Bowl in Charlotte, North Carolina. Both Virginia and South Carolina finished their seasons at 7-5.

The Missouri Tigers impressed the conference and finished 8-4 while the OSU Cowboys finished with a more disappointing record of 6-6. These two are set to face off on Dec. 31st in the Liberty Bowl in Memphis, Tennessee.

Each of these teams finished their seasons rather averagely at .500, or 6-6. The Vanderbilt Commodores and the Baylor Bears are featured in this year’s Texas Bowl in Houston on Dec. 27th. The Bears may have a slight home field advantage in this game as Houston is just less than three hours from Baylor University.

The SEC West already has powerhouse Alabama in the playoffs but it also features four other teams from the division in bowl games this year.

This game should prove to be an interesting and fun one for fans on New Year’s Eve. This will be a matchup of two good quarterbacks, as well as two good coaches looking to bolster their season records. The Texas A&M Aggies and the North Carolina State Wolfpack are set to matchup on Dec. 31st in the TaxSlayer Gator Bowl in Jacksonville, Florida.

As we’ve all heard from our UCF friends, the Knights are actually the real National Champions after their back-to-back undefeated seasons. However, since the CFB selection committee is so biased, they’ll have to settle for the Fiesta Bowl against the LSU Tigers this year instead of the CFB Playoffs. The Tigers are 9-3 and will face the Knights on New Years Day in Phoenix.

We’re heading out west for New Year’s Day and our 50th bowl game! #LSU and @UCF_Football will meet in the @Fiesta_Bowl. https://t.co/Z0fQzasdJD pic.twitter.com/iosfndZtxp

Mississippi State and Iowa will face off on New Years Day in the Outback Bowl in Tampa, Florida this year. Both teams sit at 8-4 on the regular season and would like to add one more win to their resumes. The game should be interesting, but what is more fun than winning the game is winning fans either a free Blooming Onion or free Coconut Shrimp from Outback. I know I’ll be rooting for the Blooming Onions.

The Purdue Boilermakers and the Auburn Tigers will be battling each other on Dec. 28th in the Music City Bowl in Nashville this year. The Tigers are 7-5 and the Boilermakers are 6-6. Each team is disappointed in their season’s outcomes. Both teams anticipated to do much better and would certainly like to add one more win to finish off the 2018 season.