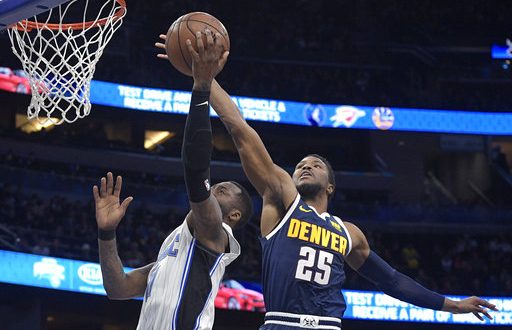 Magic Fall to Nuggets in OT

After a hard fought battle that went into overtime, the Orlando Magic fell short to the Denver Nuggets last night 124-118. Facing off against the best in the West.

After returning from their 3-3 road trip, the Magic welcomed the Western Conference leaders into the Amway Center. The Nuggets quickly jumped into a 12 point lead with excellent shooting from Paul Millsap and Jamal Murray. That lead didn’t last once the Magic got Aaron Gordon involved. They began to come back with Gordon ending the first quarter with 13 points.

Once the Nuggets picked up on their rotation and began to get Nikola Jokic as both ball handler and screen setter, the Magic defense began to disappear. This gave the Nuggets open looks and allowed them to take off. Despite poor defense, the Magic still kept a close game throughout, keeping up with the Nuggets shooting.

“It was just terrible. Terrible. It’s the same thing every day, man. Every day we come in and we see on the board that we’re 30th in free throw attempts, nothing changes,” said Magic swing man Evan Fournier. “We’re one of the teams that never complains and every time we say something, we get a technical. It’s just terrible. Never stops, man. Of course, it’s frustrating, man. We’re fighting hard. It’s OK to not get the calls, but sometimes it’s just unfair. You can’t have that. It’s just not possible.”

Down by three, the Magic began forcing the three ball but shots were not falling. Despite a rough night for the defense, they came up big at the end of regulation forcing a stop and giving the ball back to the Magic. With that Terrence Ross was able to hit a three-pointer with six seconds left in order to tie the game 112.

The Magic defense then came up with another big stop in order to send the game into overtime.

In overtime, the Magic’s legs just gave out and the Nuggets continued with their impressive shooting that they have had all season. With Fournier fouling out and the Nuggets still getting sent to the foul line, the lead was up to seven. The Magic later then cut it to three, but another foul committed by the Magic put the Nuggets up by five to and that secured the game.

Looking Ahead into December

Up next for the Magic: they welcome in the Indiana Pacers tomorrow, then head to Dallas. After the Magic will head to Mexico City to play two games against the Bulls and the Jazz. With a tough couple of games ahead, the Magic need to look into improving their defense.

With impressive shooting and the second unit becoming more reliable, all the Magic need is a better defense and they can see themselves as a top-five team in the East.

Took it to overtime, but came up short.

Back at it on Friday at home against the Pacers. pic.twitter.com/oEgY605BZA