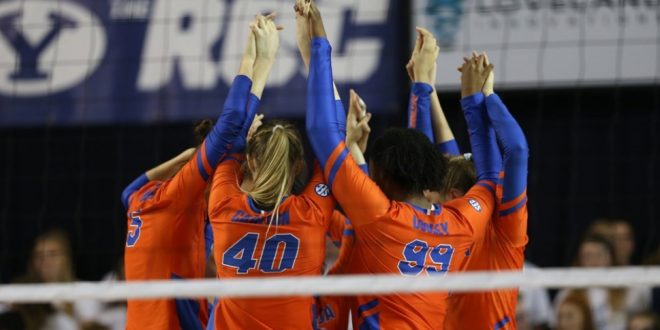 Florida Volleyball 2018: A Season of Lessons

Florida’s 2018 season began with a 3-1 win in Lincoln, Nebraska over the then-No. 2 Cornhuskers. It ended in Provo, Utah with a 3-1 loss to the No. 4 BYU Cougars in the regional semifinal Friday night.

It was a quest for consistency and growth for Mary Wise’s young squad.

It was a season that saw Florida drop a five-setter to Northern Arizona in September and then promptly rattle off 14 straight wins.

A season where young players grew after they were forced to shoulder the load.

“The Gators have a lot potential in the future and I am so blessed for everything I have learned this season as a Gator in my first year,” redshirt sophomore Holly Carlton said Friday night.

Florida ended with an overall record of 26-7, 15-3 in conference play. Florida has finished its season with at least 25 wins each of Wise’s 27 seasons. They have 29 between her and former coach Marilyn McReavy.

Their 15-3 SEC record places them at third in the standings. It is the 26th time under Wise Florida finds itself inside the top three in the conference standings.

To the best fans in the nation – Thank you for your support all season long!#GoGators #GatorsNation pic.twitter.com/m08TpAFDZg

In terms of statistics, the team finishes ranked in the top ten in blocks per set (10th with 2.84), total team blocks (fourth with 338.5) and opponents hitting percentage (ninth at .156) with the NCAA Tournament’s national semifinals and championship still left.

Here are the statistical team leaders for Florida:

The Gators say goodbye, at this point in time, to just two players: setter Allie Monserez and middle blocker Taelor Kellum. A true testament to the youth on this Gator team.

Kellum patrolled the net with Rachael Kramer all season. She didn’t have much opportunity to see major playing time in the first three years due to the presence of Kramer and four-time All-American Rhamat Alhassan.

Monserez served as Florida’s primary setter since her transfer from South Carolina. The Windemere, Florida native posted double-digit assists in every 2018 match, including 11 double-doubles.

She is the middle child of a volleyball lineage at Florida. Her older sister, Maddie, was a DS under Wise from 2011 to 2014 and her younger sister Marlie backed Monserez up at setter this season as a freshman.

“My time as a Gator has been unforgettable. From the moment I decided to transfer, everything just lined up,” Monserez said Friday night. “This year, the group was so different than last – it was so special to be with this team, especially having Marlie here.”