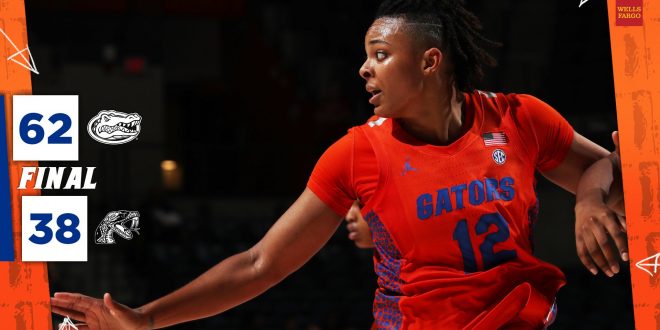 The Gator women’s basketball team finished up its four game home-stand with three wins in a row after defeating the Florida A&M Rattlers 62-38 on Sunday.

Their winning momentum continued yesterday despite being short-handed on offense.

The Gators entered this game with their leading scorer, Funda Nakkasoglu, who averages 20 points per game, out with an ankle injury. With such an offensive threat out of the line-up, the Gators still had no problem getting it done on the offensive end against the FAMU Rattlers.

Three Gators finished the game in double-figures, including Zada Williams who started the game with 12 first half points and ended with a career high 16 points in her fourth start.

This exceeds her previous season high of 14 points which she found in the previous match-up against Bethune-Cookman.

More of this offensive fire came from Ariel Johnson, who went 4-9 from the 3-point line, netting 13 points for the Gators.

3⃣ in a row✊ pic.twitter.com/dY6OvOBbls

The Gators had a huge third-quarter to step in front of the Rattlers by double-digits.

After giving up a 12-4 run to the Rattlers at the end of the first-half, the Gators went into halftime only leading by four points.

Finding their composure, the Gators only gave up only two points in the entire third-quarter. They outscored the Rattlers 21-2 and out-rebounded their opponent 14-4.

The momentum started early in the quarter and continued to the end with a buzzer-beater three-pointer from Corey Staples. Their 56% shooting and 14 rebounds in the quarter led the Gators into the final 10 minutes leading by 23 points.

With the hopes of keeping their winning streak alive, the Gators will now have a week break for finals before they head to Columbus, Ohio to take on Ohio State on December 16th.  The next home game for the Gators will be on December 30 when they take on Charleston Southern at 2 pm.