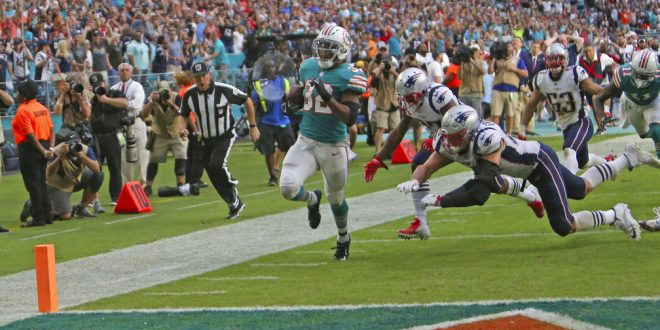 Miami Dolphins running back Kenyan Drake (32) runs for a touchdown during the second half of an NFL football game against the New England Patriots, Sunday, Dec. 9, 2018, in Miami Gardens, Fla. The Dolphins defeated the Patriots 34-33. (David Santiago/Miami Herald via AP)

A play so shocking, it already has a viral name: the Miami Miracle.

Miami continues to be a house of horrors from Tom Brady and the Patriots, but Sunday might have been their worst nightmare to date.

Down 33-28 with :07 left on the clock and the ball at their own 31-yard line, the Dolphins opted for the good ol’ hook-and-ladder. It’s a play that rarely, if ever, works.

This was one of those times that it did.

Kenyan Drake caught the final lateral and out-ran a group of Patriots defenders that included tight end Rob Gronkowski for a 69-yard touchdown. The score gave the Dolphins a miraculous, buzzer-beating 34-33 win over their division rivals.

The play capped a thrilling encounter that saw the second-most lead changes in a game in NFL history.

I knew yesterday’s Dolphins-Patriots game felt like a fun back-and-forth affair, but I didn’t realize it was THIS wild: Nine lead changes rank as the second most of any game in NFL history.

Both teams came in with a lot on the line. Miami was looking to stay alive in the wild card hunt. New England meanwhile looked to exorcise it’s South Beach demons while also keeping pace with Kansas City for home-field advantage in the AFC playoffs.

Brady is now just 7-10 in his career visiting the Dolphins and the Patriots are now just 1-5 in their last six games in Miami. Though, the 41-year old quarterback won’t get too much of the blame for this one.

He and the passing game had one their best games of the season. Brady threw for 344 yards and three touchdowns. It helped that Rob Gronkowski had the best game of his season (offensively, at least) by posting eight catches for 107 yards and touchdown.

The issue was, the Patriots defense couldn’t stop the Dolphins either. Ryan Tannehill had a very efficient game, going 14-for-19 for 265 yards and three touchdowns. In the process, he also became the first quarterback to beat Tom Brady four times in the regular season.

Tannehill didn’t have to throw often because the Miami’s ground game went to work. As a team, they carried the ball 21 times for 189 yards, thrashing a below-average Patriot’s defense for 9.0 yards per carry. Former Patriot running back Brandon Bolden hurt his ex-team twice, with two touchdowns on two carries including a 54-yard scamper.

The win for Miami keeps them in the playoff hunt. At 7-6, they’re tied for the last Wild Card spot with Baltimore and Indianapolis, though both are ahead of Miami on tie-breakers.

Meanwhile for the Patriots, they still remain the No. 2 seed and can clinch the division next week in Pittsburgh.

However, their hopes of making the playoff go through Foxborough took a big hit. A Chiefs win on Thursday night against the Chargers would give Kansas City a 2.5 game lead for the No. 1 seed, while a Chargers victory would give them a 1.5 game lead over the Patriots in the race for home field advantage.