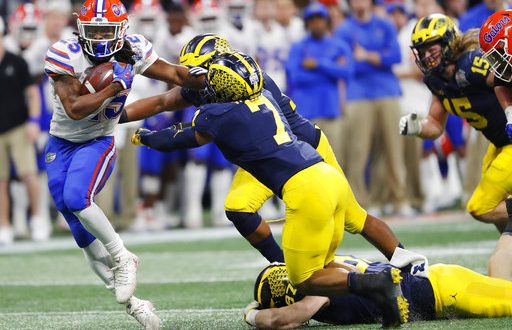 The first year of the Dan Mullen era is officially over, with the No. 10 Gators securing a 41-15 win over No. 7 Michigan Saturday in the Chick-fil-A Peach Bowl.

With two of the top defenses in the country facing off, Saturday’s game was not expected to be high-scoring.

However, the Gators offense did not seem to have a problem deciphering Michigan’s scheme.

Fortunately for Florida, two picks from Chauncey Gardner-Johnson allowed their running backs more time with the ball. Lamical Perine and Jordan Scarlett each had a touchdown, as well as 76 yards and 59 yards, respectively.

Gardner-Johnson said he was doing everything he could to get his offense the ball:

“Basically, just getting the ball back to Feleipe and Lamical, because they running hot. Wanted to get the ball back, keep running them. They kept us up the whole game. If it wasn’t for them two, the whole offense, there wouldn’t be no points on the board. We wanted to go out there and hold our ground and give us a blade of grass and we’ll defend it. That’s what we did, and give them boys back the ball.”

Head coach Dan Mullen finished his first season with the Gators with 10 wins. Mullen is just the second coach in program history to accomplish this. He has spoken consistently throughout the season of the “Gator Standard”.

Quarterback Feleipe Franks shared his thoughts on what Mullen has done for the program thus far:

“Just filled with emotion and just on how much I felt like I’ve improved from last season under Coach Mullen and Coach Johnson, and how much this team’s improved from last season as well. So it’s just a great feeling, tears of joy, that I’ve always wanted to be in the middle of confetti falling down on me, winning championships. Coach Mullen’s bringing that back to Florida.”

Florida linebacker Vosean Joseph also had high praise for Mullen, saying “This is big. All I have to say is the Gators are back, and I’m proud of Coach Mullen and the staff they have here and how they keep pushing us. They’re going to keep pushing us to be great players and great men in the world.”

Born and raised at the ballpark! Typically quiet- until it comes to sports. I'm a South Florida native with a passion for baseball nearly as strong as my faith. Grew up in garnet + gold, turned out sporting orange + blue. Likely to be found with a camera. And yes, I take food pictures.
@victoriarossman
Previous Gator Basketball Demolishes Butler at Home
Next Gators’ Peach Bowl Blowout of Michigan Caps First-Year Turnaround Under Dan Mullen