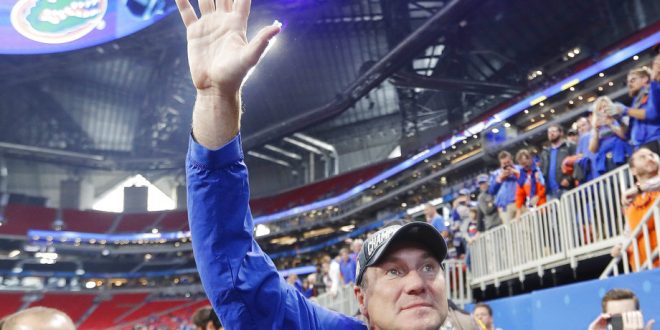 ATLANTA — What a difference a year makes.

At this point last year, Florida was coming off a 4-7 season. A season in which it fired it’s head coach (Jim McElwain), it’s young quarterback lost all his confidence (Feleipe Franks), and it took a back seat to other schools in the state (FSU, Miami, UCF).

Fast forward 365 days, and the Gators’ program stands in a much better place. That is thanks to the work of Dan Mullen and his staff.

Beatdown in the ATL

The culmination of that work was on display Saturday in Atlanta. The Gators won the Chick-fil-A Peach Bowl, demolishing a 10-2 and top-10 Michigan team 41-15 at Mercedes-Benz Stadium in a game which showed just how much Mullen has meant to this program.

“…It’s just a great feeling, tears of joy, that I’ve always wanted to be in the middle of confetti falling down on me, winning championships,” Franks said. “Coach Mullen’s bringing that back to Florida.”

In this last game of the Gators’ 2018 season, Mullen and the team accomplished many firsts.

When Mullen took charge, fans wanted to see improved play on offense and a renewed commitment to what Mullen calls “the Gator standard”, and they got both.

Florida ran for 257 yards against the top-ranked defense in the country. It was the ninth time this season in which the Gators rushed for at least 200 yards. Franks continued his good end to the season with an efficient performance in which he didn’t turn the ball over, made a couple of nice throws down the field, and showed off the strides he’s made as a runner (14 carries, 74 yards, 1 TD).

Doing What He Was Brought In To Do

Franks ended the season with 30 total touchdowns. He’s the first Florida quarterback since Tim Tebow in 2009 to reach 30 touchdowns in a season. It’s a massive improvement on his poor redshirt freshman season last year that made Mullen’s first task building his quarterback’s confidence back up.

“I think that — especially me, I don’t think my confidence could have got any lower, where there had been a bunch of different things,” Franks said.

“Being able to come out here and, like he said, not play conservative. Just go out and play the game I’ve been playing my whole life. And it just made football fun again. That’s kind of what it did for me.”

It showed just how far Franks his come in his first season under Mullen’s coaching.

“Grew up, matured, and really understood the offense, understood the game plan coming in today,” Mullen said. “You saw, I don’t think, at any point during the game we got conservative in what we were doing because we just trusted he’d make good decisions and get the win for us.”

That aggressiveness also showed on the other side of the ball, where Florida’s defense locked after the first quarter. Two interceptions, including a pick-six, from Chauncey Gardner-Johnson in his last game as a Gator were the highlights of a defense that held Michigan to eight points in the final three quarters.

“Like I said, this year was nothing but joy, you know,” Gardner-Johnson said. “Like I said, we took some losses, but the majority of them, we won. All my teammates are smiling. We got that feeling back we had my freshman year.”

Franks, and the team as a whole, were all being maligned after Florida’s surprising 27-16 loss at home to Kentucky early in the season. With a tough schedule ahead, many were questioning Franks, Mullen, and the state of Florida’s program.

Big wins against Tennessee, Mississippi State, and LSU reinstalled confidence in Mullen and the team. Beating the brakes off of Florida State was the stamp on a good regular season, but this win over Michigan, in a New Year’s Six bowl, has the Gators with a lot of momentum as they enter 2019.

All because of a successful first-year turnaround under Mullen.

“You ask what a successful season is, and it’s you got better every single day. I would call this season a success,” Mullen said. “I’m proud of all these guys up here on stage with me. But the whole team and those guys bought in to believing what we’re trying to build and to get that Gator standard back.”