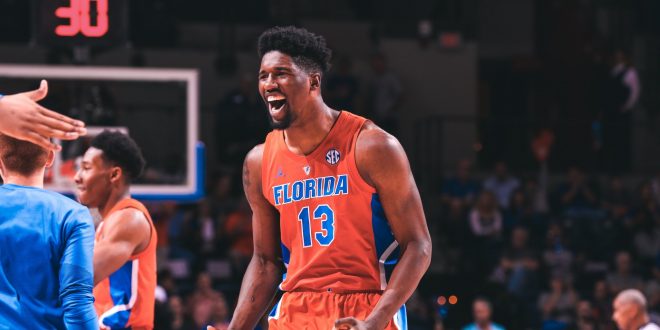 The Florida Gators’ men’s basketball team picked up a huge win on Saturday, defeating the Butler Bulldogs by a score of 77-43 at home. The Gators were clicking on all cylinders in what was an extremely impressive win for the team. This was the last game of the Gators non-conference schedule. Noah Locke and Keyontae Johnson both led the team in scoring with 12 points each as Florida improved to 8-4 on the season.

The Gators got off to a blistering hot start in the win as they scored the game’s first 21 points. They hit 10 of their first 13 shots and blitzed the Bulldogs with their hot shooting. Their quick start in the opening minutes didn’t fade, however. Florida extended their lead to as much as 27 in the closing minutes of the first half and they took a 43-18 lead into the half. From the opening tip-off, the Gators were locked in on both sides of the ball.

The Florida offense has struggled all year in a multitude of ways. Ball movement, ball security, shot selection, and free throws have impaired the team’s offensive efficiency so far this season.When the Gators took on Butler back on November 23rd, Florida only scored 54 points, shot 34.6% from the field and had only 11 assists. The Gators looked like a different team on Saturday. Florida scored 77 points, shot 53.6% from the field and hit 10 threes on 21 attempts in a very productive offensive game. The Gators had five players score in double digits: Noah Locke, Keyontae Johnson, KeVaughn Allen, Jalen Hudson, and Keith Stone. After the game, Coach Mike White expressed that he was happy with his team’s confidence in the win.

It wasn’t just a great offensive performance for the Gators: their defense put on a show that was just as impressive. They held Butler to 43 points and forced 10 turnovers. The Bulldogs were held to just 31% shooting on the night. The defensive rotations and help defense were fantastic in the win as the Gators made the Butler offense uncomfortable. Florida did a particularly great job against Butler guard Kamar Baldwin, limiting Baldwin to just 9 points on 3-12 shooting as compared to the 19 points he scored in the early season matchup between the two teams. Butler’s 43 points was the lowest point total the Gators have allowed all season.

The Gators made a lot of winning plays in this one. From Mike White on the sidelines to every player that saw the floor, Florida’s energy was undeniable. One huge advantage for the Gators came in the rebounding department. Despite Butler not having much height, they out-rebounded Florida in their November 23rd matchup 35-33. Today, the Gators dominated on the boards. They grabbed 46 rebounds while the Bulldogs brought down just 18. The Gators energy sparked their great night on defense as they recorded 6 blocks and 6 steals.

The Gators open up the conference portion of their schedule, beginning with a home game against South Carolina on January 5th.

Previous No. 10 Florida vs. No. 7 Michigan: Peach Bowl Preview
Next Florida Wins Peach Bowl with 41-15 Beatdown Over Michigan