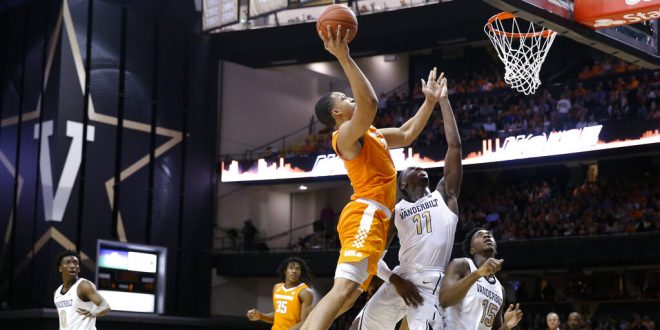 Vanderbilt fans watched in agony as Grant Williams finished a three-point play with 31.6 seconds left to close out an 88-83 overtime win for top-ranked Tennessee Wednesday night.

Williams’ career-high 43 points left the Commodores at 9-9 and still winless in the SEC, while Tennessee improved to 17-1 and is still undefeated in conference play.

Player of the Year candidate Grant Williams joins @TheAndyKatz to discuss his career performance against Vanderbilt, the final play in regulation, the Vols’ “Gator Chomp” earlier in the season and more! pic.twitter.com/USok6ouTPz

How it Played Out

Vanderbilt showed Tennessee being the top-ranked team is not an easy task. The Nashville team led 76-70 with 1:22 left in regulation, with both teams embracing contact in the paint.

It did not stop there, with most of the action happening from within 15 feet of the basket. Vols guard Admiral Schofield only had six points but tied the game at 76 with a strong move over redshirt junior forward Matt Ryan. The Commodores Aaron Nesmith and Saben Lee combined for 45 points and 10 rebounds.

Additionally, Vandy was without Darius Garland, who announced he’s withdrawing from the university to prepare for the 2019 NBA Draft. The guard had suffered a season-ending injury to the meniscus in his left knee versus Kent State earlier this season. Williams gave credit to Vanderbilt for the team’s performance.

They fought hard tonight and we respect them…They’re going to give a lot of teams trouble this year and further on.

Williams’ World and We’re Just Living In It

Williams continues to look like a pick for college basketball’s player of the year. The power forward finished the game perfect from the free-throw line, hitting all 23 of his attempts. This is the most free throws without a miss in an NCAA game since Oklahoma State center Arlen Clark hit all 24 on March 7, 1959.

In fact, Williams scored 35 of the Volunteers 50 points in the second half and overtime combined. Leading Tennesee to its second No. 1 rank in history, his play is arguably as significant as another forward this season — Duke forward Zion Williamson. The former SEC Player of the Year is averaging 20.3 points per game and seven and a half rebounds on 57 percent shooting in 2018-19.

Next up, the Vols return to Knoxville to face the West Virginia Mountaineers (9-10, 1-6) in the SEC/Big 12 Challenge. On the other hand, the Commodores SEC/Big 12 Challenge matchup is against Oklahoma (14-5, 3-4). Both games take place on Thursday afternoon at 4 p.m.