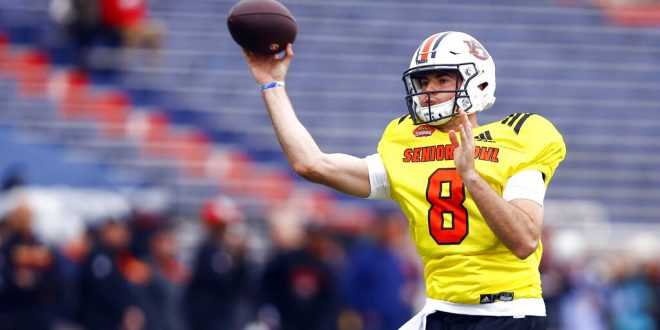 With the 2019 Senior Bowl just a couple days away, players are preparing for the games and NFL teams are looking to watch them. The Senior Bowl is set to take place on Saturday, January 26, at 2:30 p.m. This is 70th Reese’s Senior Bowl in Mobile, AL.

Under-the-radar players use this game to improve their draft stock and showcase their talents before the NFL combine and the draft.

One of those players being Auburn’s quarterback Jarrett Stidham.

He is one of eight quarterbacks playing in the Senior Bowl this weekend. Stidham addressed the media yesterday ahead of his first Senior Bowl practice.

Stidham says that so far the Senior Bowl practices have been great and an incredible opportunity.

According to Palm Beach Post’s Joe Schad, Stidham met with the Miami Dolphins. A lot of different NFL teams have been asking Stidham the same question in media interviews. What’s been the difference between the 2017 and 2018 seasons? Stidham’s number took a big step back this season from the previous season.

Jarrett Stidham has faced one big question from NFL teams this week at the Senior Bowl: How do you explain the drop-off from 2017 to 2018?

How Stidham answers that, plus how he hopes to set himself apart in a weaker QB draft class https://t.co/7pNBOkRGbU pic.twitter.com/5HnvGcpTze

Stidham says NFL teams should know he faced a lot of adversity on and off the field, which makes him a better quarterback.

Sydney is a senior studying telecommunications with a specialization in sports media at the University of Florida. She is a multimedia sports reporter for ESPN 98.1 FM/850 AM WRUF and WUFT-TV.
Previous Tiger Woods to make anticipated 2019 debut at Torrey Pines
Next Grant Williams’ heroics leads top-ranked Tennessee to OT win