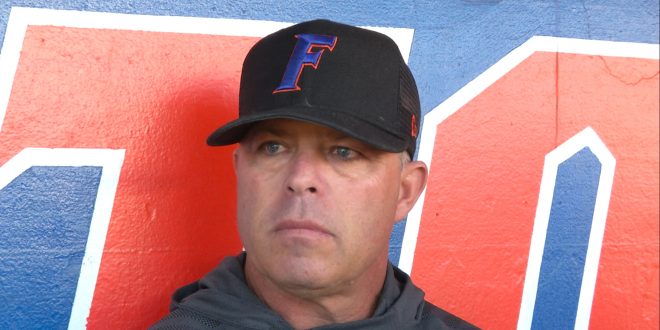 The Florida Gator baseball team begins full team practices today for the upcoming 2019 season. The practices will last for three weeks prior to the start of the season on Feb. 15.

The Gators finished the 2018 season with a 49-21 record before bowing out to the Arkansas Razorbacks in the College World Series. Arkansas would go on to finish runners up in the World Series Finals to Oregon State.

Jonathan India led the way at the plate, batting .350, hitting 21 home runs, and knocking 52 runs in.

On the mound, the Gators trusted juniors Brady Singer and Jackson Kowar to start, with Singer pitching 113 innings and Kowar pitching 112.1.

However, all three former Gators were selected in the 2018 MLB Draft. India went No. 5 to the Reds, Singer went No. 18 to the Royals, and Kowar went No. 33, also to the Royals.

Although the Gators lost some key members of the team, several veterans still remain, including the likes of seniors Nelson Maldonado and Blake Reese.

One of the returning players from last season who made an impact as a freshman is Jordan Butler.

In his first season with the Gators, Butler made 31 appearances on the mound, 27 of which came from the bullpen. From the pen, Butler held a 3.75 ERA. Overall, Butler had a 6-2 record with a 4.10 ERA through 52.2 innings pitched.

For starting pitchers, the Gators have the option of sophomore right-hander Jack Leftwich. In 2018, Leftwich began the season coming from the bullpen. In 25.1 innings out of the pen, Leftwich held a 1.78 ERA.

Leftwich then moved into a starting role and pitched 12 games. Overall, Leftwich ended the season with 24 games playing and 81.1 innings pitched with a 4.20 ERA.

Despite the experienced players on the roster, head coach Kevin O’Sullivan said that some freshman will be getting significant playing time this season, with some potentially starting.

On Saturday, Feb. 9, the Gators will take part in an alumni scrimmage, facing a team comprised of forming Gators.