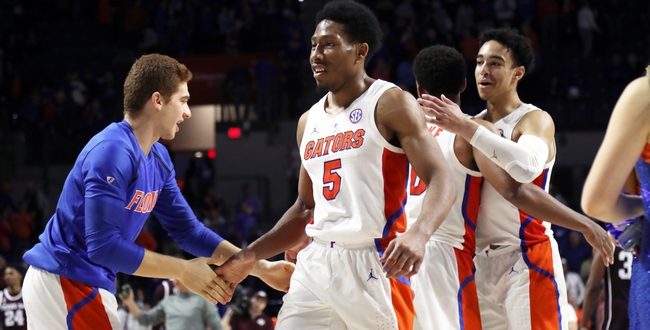 The Florida Gators could not overcome a 12-point halftime deficit in a 55-50 loss to the TCU Horned Frogs.

KeVaughn Allen led the Gators in scoring for the 6th straight game with 11 points, while Keyontae Johnson added 9 points and 8 rebounds.

Final from Fort Worth pic.twitter.com/X1fkYGD7mD

The first half was very rough for the Gators. They went down 11-0 and did not score a basket for the first 5 minutes and 50 seconds of action.

They shot 8-29 (27.6%) from the field and 3-11 (27.3%) from beyond the arc in the first half. Mike White’s team had 7 turnovers and generated no second chance points. They were down by as many as 16 points and went into the half down by 12. The length of the Horned Frogs gave the Gators major issues.

The Gators turned things around very quickly in the second half. They went on a 14-2 run to tie the game at 34. TCU went on a 8-0 run, but the Gators kept the deficit within striking distance for the entirety of the second half. However, Florida was unable to capitalize on their opportunities and suffered their 8th loss of the season.

Jalen Hudson continued to struggle with only 6 points on 2-10 shooting. His shooting percentages are some of the worst in college basketball.

They held TCU to eight second chance points and forced them into consistently long offensive sets.

Kevarrius Hayes owned the interior, limiting the big Horned Frogs front line to 24 points in the paint. The senior had a team-high 5 blocks and moved to 3rd place on the Gators’ all-time blocks list.

Keyontae Johnson showcased why he is considered one of the best freshman athletes in all of college basketball. He continuously attacked the rim with authority and used his length to break up multiple passes.

The Gators are about to embark on arguably the toughest four game stretch in all of college basketball. They are hosting No. 20 Ole Miss on Wednesday, January 30th at 6:30 p.m. After that, they will host No. 8 Kentucky and then will hit the road to take on No. 16 Auburn and No. 1 Tennessee.

Previous Florida Gators Baseball Begins Practices for Upcoming 2019 Season
Next Can The Gators Figure Out Their Offensive Woes?